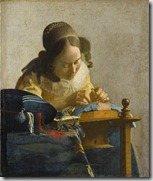 Johannes Vermeer was a Dutch painter active in Delft in the mid-1600’s; he captured everyday, domestic scenes characterizing middle-class life of the Golden Age.  Het Meisje met de Parel is probably his most recognized work, but thirty-four authenticated paintings have been catalogued into museums.  Four of those (including The Lacemaker, right), along with two dozen associated works by artists of the same period, are collected in Vermeer’s Women, a free exhibition at the Fitzwilliam Museum in Cambridge (UK).  It’s a short train ride north from London and a worthwhile detour if you are interested in everyday Dutch life as depicted by a variety of painters contemporary with Vermeer.

The paintings center around women at work in the home.  Tradesmen bring their wares to the front hall (voorhuis) for sale; servant girls offer selected items to the wife living in the personal spaces at the back, interrupting her 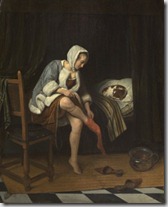 sewing.  There are scenes of women lost in their reading of books and letters, leaning from windows to talk with friends, attending to morning or evening dressing (left is Jan Steen, Woman at her Toilet).

As with many Dutch paintings, these often seem dark and brooding, dim settings rendered in melancholy blacks and yellows.  I don’t know if that is realism from the time (large wooden rooms lit by candlelight, with few windows), aging of the paints, or the influence of Rembrandt.  The women look luminous within the pictures, porcelain skin and satin clothes, all finely rendered in bright colors as compared to the flat textures of objects in the rooms.  The accompanying text does a good job of describing the 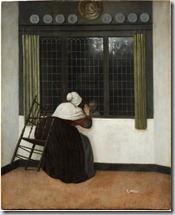 narrative symbolism of objects in the rooms, and of the conventions of household layout and management in the 1600’s (right is Jacobus Vrel, Woman at the Window, exchanging glances with a young girl who might be outside or might only be a reflection).

The pictures, to me, suggest a very solitary life.  The rooms have few furnishings apart from plates above the hearth, a chair and a table and lots of empty floors.   The women seem lost in their own work, seldom talking or making eye contact with one another or the viewer, often turned away.  Children are more often seen entreating distant mothers than playing with them.  The technique and use of colour is lovely, though, and there is lots to reflect about Dutch life both then and now.

The exhibition runs through mid-January.  Lines were long leading into the exhibition but they moved quickly.  Once inside, the best strategy to is drift between paintings: the crowd flows in knots and it’s easy to dip into the gaps and see everything without waiting for each work in turn.

For details on Vermeer’s life, works, and upcoming events highlighting his work, I like The Essential Vermeer, a well constructed and actively maintained web resource.