Winter seems to bring out the strange stories:

“Crop circles” have appeared in the snow on ponds outside Arnhem’s WaterMuseum.  This caught my eye because I used to live a few blocks from the park – the meteorologist can’t explain it; the locals swear that they have nothing to do with it.  (The Gelderlander)

It’s actually a big open space outside the city ring road near the train station, no unusual wind patterns that might create a  microburst that cleared the surface or trees to shield the way the sun strikes the surface.  and beneath, well, it’s ice: there’s nothing to melt the snow.  I’m out of theories.

80% of Netherlanders would vote Democratic if given a choice for president.  (The Volkskrant)

I’ve been thinking about this one for a couple of weeks.  It’s not surprising given the generally liberal politics of the Dutch, and I’m sure the Republicans baffle everyone in Europe.  Still, with the rising concerns about immigration policy, the European monetary crisis, and disenchantment with Pres. Obama, I would have expected this number to soften.

It’s interesting that the religious division between Republican and Democrat is most notable to a Dutch writer – all American politicians are quick to declare themselves Christians and to label the Bible among their favorite books, so it doesn’t distinguish politicians for us.

And I do like the quote “Je kunt uitleggen wat je wilt over Amerika, maar dan nog zullen Nederlanders voor 80 procent de voorkeur geven aan een Democraat. Niet omdat ze het niet begrijpen of omdat ze vooringenomen zijn, maar omdat ze Nederlander zijn.”  You can say what you want about America, but 80 percent of Dutch will prefer a Democrat. Not because they do not understand or because they are biased, but because they are Dutch.

I also smile when they call Gingrich the comeback-opa.

Of course, no week in Dutch news would be complete without an article about Dutch women. (Amsterdam Magazine)

Of course, as a father-of-daughter, I have a slightly different take on this.   Strong confident, good fashion sense, loves a debate: isn’t this what we wish for our offspring? 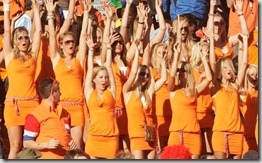 And I couldn’t end without an economic story, especially if it ties into Carnivale.  (De Limburger)

And worth every stuiver.  The fun begins next week. 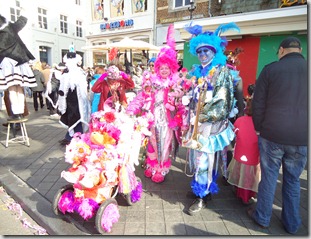