I’m starting to think that I am dragging the bad weather around with me.

It was an uneventful flight back to Heathrow, early morning out of Seattle, early morning arrival into London, with a 3-hour layover in New York.  I was traveling much lighter this time, fewer laptops, fewer gifts,after dropping everything off at the clinic and into the mail. It makes dragging through the Tube stairways easier, although I still tend to set both bags down, eyeball the flight of stairs, sigh deeply before I grab handles, left and right, and start the climb.

The week felt more rushed than usual.  In part, I’m used to being 8 hours ahead of everyone in the US; this week I was 8 hours behind everyone in Europe.  So I’d wake up to find the Dutch finishing their day, the British midway through.  Phone calls would have to be done by 8 am, when Maastricht called it a day: I couldn’t get up early enough to keep up.

Still, we accomplished a lot.  Dave and I spent two days preparing for the start of the clinical trial, revising protocol documents, securing approvals from Quorum, practicing electrode positioning. 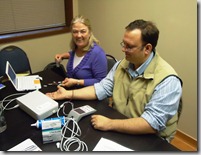 By Thursday, we were ready to engage with RCRC to start enrollment.  Our study nurse picked up the techniques and protocols quickly, and we enrolled our first two patients that afternoon.  The ABS prototype performed flawlessly, the data quality was excellent: we’re off to a great start on this phase of the project.

It was very good to get some time with family and friends as well.  The political circus of the Republican primary didn’t seem as deafening from within the US as it seems from outside.  Maybe the only US news that makes it into European papers is the more outlandish stuff, Santorum’s ranting, war with Iran, mortgage meltdowns, religious extremis, the 1% divide.  The US media takes a more measured view, apart from the extremes of Fox and MSNBC.  In fact, there’s a sense of optimism, like the economy and jobs situation has turned a corner and life is improving again.  It’s not a sense that the Europeans have of America 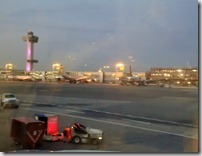 (or, indeed, of themselves).

Unfortunately, it was a bad week for the Dutch practice.  I’m finding that I have about two discretionary hours each day.  It can do my “daily Dutch”, but if I go to exercise (which I’ve done all week), then there’s no time for language training.  The blog and letters to friends also compete for that same window.  Multitasking, reading the FD on the exercise bike, doesn’t work well: productivity on both tasks falls off sharply.

The week ahead looks challenging: two full days of class activity at Cambridge, investor meetings for CamStent to closed the funding round ahead of the Board meeting, analysis of the data starting to flow in from Seattle, billing and invoices, end-of-the-month accounting.

And jet lag.  And, by the look of the skies and the sleet on my windshield, more snow.