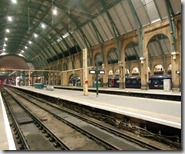 I was discouraged before I arrived at the empty tracks at King’s Cross station.  I’d been going flat out for a week since returning from the US: two teaching days to finish, investor meetings in London, calls on several projects backed up, the end-of-month bookkeeping waiting for attention.

I put my lists together and pounded through the tasks one by one, the momentum of crossing things off building an illusion of getting things done. By yesterday I thought I was well on top of things.

In reality, I was minimally prepared and pretty well worn though when I reached London for the day’s meetings.  The Monday morning messages were the first sign: email is always always sticky, in that answers tend to generate comments rather than closure, but this time there were more questions and issues than usual.  A routine trip to St. John’s to pick up the mail got tangled in cross-town traffic that held me to less than a block’s progress in half an hour.  The trains ran slow; the news paper had more bad news about Afghanistan where my son is deployed.  I know he’s okay, but it’s a worry.

The Board meeting probably lasted twice as long as it needed to, and we missed talking about several key issues.  In hindsight, I didn’t have my proposals framed up or my arguments rehearsed, so we wandered around some key issues instead of deciding them.  On the Tube, thinking back, there’s really a pattern forming: I haven’t been focused, crisp, prepared, on top of the best game that I know how to play.  I was just sliding by: getting things done, but not done well.

There’s a ripple to this.  Tasks have to be redone, supplemental questions need answering.  The interpersonal dynamics shift, confidence ebbs.  I was reading an article last week by Megan Fitzgerald about how lack of confidence shows through to others:

It was a menu of my Monday.

There’s not much to do except to dust off and get back into the scrum.  A bit of sleep, a time-out to review, a quick affirmation of the many things that are still going right.