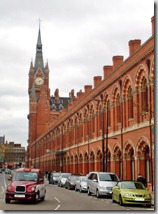 I can’t begin to count the number of times I’ve transited Kings Cross / St. Pancras stations in London.  It’s the major crossing point between London and Cambridge trains, a Eurostar hub, and my go-to spot for free WiFi as I dash between meetings on the Tube.  It’s also dim, crowded, a bit run-down and occasionally depressing if it’s late and the da has been difficult.  I can pluck a platform off of the orange reader-board announcing train departures whilst on the run,and know exactly where to grab a sandwich slice or coffee along the way.

St. Pancras opened a major renovation a couple of years ago, and the updates have been underway for the Kings Cross station.  The new departures area opened this week, and it’s a pretty nice change.  They’ve opened up the area adjacent to the old building with new ticket areas and restaurants, more space, better lighting and higher ceilings. 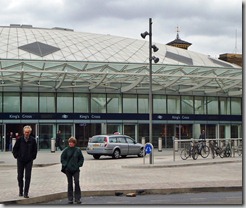 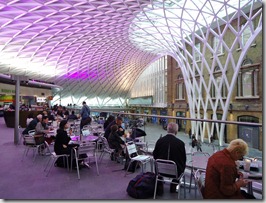 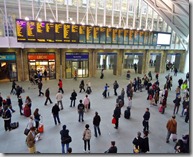 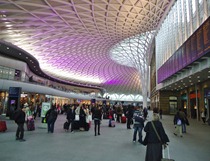 On the downside, the Evoluon-Eindhoven style of the building doesn’t fit the station well, and the ceiling lattice, similar to the British Museum, is more of a façade than an integral part of the building.  The train announcements have been expanded into a long runner board that will take more time to read than the concise stack of departures, so I’ll need to adapt my style.

But it’s closer to my 9-10 departure platforms and a welcome change from the previous waiting area.  I expect my 10pm moods to improve each time I dash through. 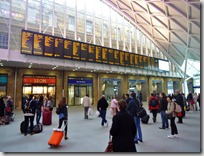 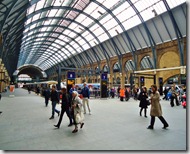