Globalisation is the ongoing process by which territorial boundaries and national states lose their hold over economy, politics, and culture.  Luke Martell reviewed the various intellectual camps, ranging from hyperglobalists (States wither away because the movement of money, technology, and media can’t be controlled by political institutions) to global skeptics (National identities have a history and a hold on the popular imagination that global identities cannot replace, even though global products and ideas seep in).  But they disagree only about the pace of change, not it’s influence on modern life.

Nor is there much disagreement that the process has been socially disruptive, in at least four areas:

The IPPR report notes that globalization and it’s attendant disruption is not new.  The first wave was the voyages of exploration and the rise of merchant states like the Dutch, Portuguese in the 15th-17th centuries.  The second wave was the rise of global military and economic powers, the British and Americans, in the 19th and 20th centuries.  The third wave will see the emergence of emerging markets, like the much-hyped BRICs (Brazil,Russia, India, China) feeding consumer markets in the established economies.

Economies can’t just consume, though: they must create something that other’s want in order to thrive.  The report returns to Porter’s ideas of competitive advantage and suggests that their relative advantages in the third wave parse out like this: 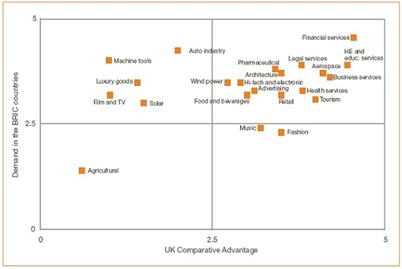 Their conclusion is As a relatively highly-skilled medium-sized economy with a comparative advantage in a number of high-value sectors, the UK has the potential to benefit significantly from deep integration with the global economy. In sectors such as financial and business services, pharmaceuticals, aerospace, education and health services, green technology, hi-tech and electronic industries and tourism, increasing global demand can help create jobs and opportunities in the UK.

But, while  Europe can compete in the upper right, the clear winners will lie to the lower right. And, although I agree with the analysis, this is where the recommendations falter a bit.  Is the future really just fashion and music?

email
« Are liberals tolerant?
I don’t like Mondays… »
Radar Weather