Back in the Netherlands, then on to the UK for a few days before returning to the Dutch.  I’ve got a few bigger things to write about later in the week, but a few small things today.

I traveled to Brighton for a review of our microbiology results on the anti-microbial catheter coating: it seems to be doing everything we had hoped for.  Additional information from our chemistry group in Sheffield was similarly encouraging.  Coming on the heels of a nice result from the Chicago and Seattle experiments, I’m in the happy position of having a palette of good results from both projects.

I was thinking, walking along the pier, about how much risk this all was at the outset, good

ideas with innumerable ways that things could go wrong.  We’re not out of the woods yet, but a lot is going right.

I watched the kids laughing and screaming from the spinning and bouncing rides: thrills without risk.  Ironic as well as childish.

What is the longest grammatical sentence using the fewest number of words?

And a couple of new Dutch commercials, one for the Emergency Medical folks, and one for Bavaria bier fans: 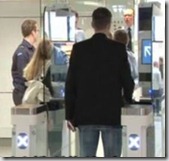 And Schiphol has launched a trial of a new, fully automatic passport scan for outbound passengers.  It only works if you have a European passport with a biometric chip: you scan the passport then a facial recognition scan. If the two match, you pass.

When I passed by, the lines looked longer – people were having trouble getting passports positioned and the face scanner to lock. But once the bugs re out, it will likely replace the quick dialog with the agent in the booth.