Early work on our surgical monitoring project has gone swimmingly.  We completed the prototype amplifiers in February in Maastricht, and took it to Seattle for first tests.  Ten subjects were successfully recorded and we analyzed the data and prepared five scientific abstracts which have been submitted for presentation at the Anesthesiology Society meeting in October.  That’s five weeks from proto to papers: absolutely unheard-of execution in medical device development.  (Yes, I’m proud of the engineers and clinical sites.)

The expectation of first public disclosure in October revives an old debate: how long should  we keep the product secret?

It affects a lot of things: who we talk with for advice, when to use a confidentiality, whether to do a market survey.  Clearly it’s a bad idea to go public before filing patents, or to emerge only when ramping up manufacturing.  Apple has been a master at building buzz ahead of a new product launch (the lines in New York for the new iPad, above, are typical), but their model isn’t transferrable to a company without a reputation. 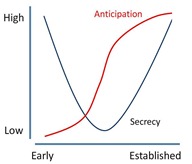 I was fiddling with how various companies do their product announcements and sketched this idea.  Early-stage companies, lower left, have no anticipation in the market, yet must keep plans secret to avoid having better-resourced competitors jump in ahead of them.  Once in the market, a successful product will build interest: it’s good to let customers know that version 2.0 is in the wings and solicit feedback about how to make it the best it can be.  Once you are established in the market, like Microsoft or Apple, then a dribble of news can feed anticipation, so secrecy again becomes desirable to avoid cannibalizing sales.

For us, it seems driven by two factors.

First, we anticipate that an established company could create a competitive product in six months once they set their mind to it.  That means that we have a six month window from launch to gain as much share as we can.

We also have to raise funds and build buzz in anticipation of being ready to manufacture so that we can fill orders and gain experience as quickly as possible, building value and momentum.

So, if market entry is expected in January, then starting to build awareness (ascending the Know/ Like, Trust curve) has to happen at least three months before starting with public announcements at the scientific meetings in October.  Limited disclosures will start earlier, composing a Board and approaching through leaders in late summer.  Then everything needs to be in place to mount a campaign ahead of launch, so brochures and 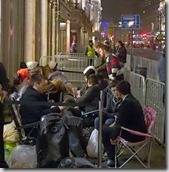 summaries will need to be ready in November.

All of which gets built into the staffing and budget estimates: the goal is to maximize sales and share in that crucial six-month window.

‘not an easy problem to match publicity and secrecy.  If we succeed, though, they’ll be lined up around the block.