Easter is almost upon us, two days of Pasen with the expected trimmings: Belgian chocolate eggs, marshmallow chicks, meringue bird’s nests and marzipan cakes.  I’ve been oscillating back and forth between Cambridge and Maastricht, logging  lot of hours by bike and train, watching city and country flow past.

I’ve often commented that the Dutch landscape echoes the great plains.  It’s flat and lush, rolling out in green sheets to a geometric horizon.  The low skies are there, reflected steel blue in irrigation ditches and rivers, dotted with horses and sheep.  The occasional vineyard and village flash by through the train windows, mornings softened with grey mist, evenings sharpened by yellow sunsets.

Still, it’s mostly empty compared to British fields carved up with hedges, less rolling than the fields in Normandy.  The farms are long, low, and tidy: a surprising number of ornamental trees and garden sculptures giving the barns and houses extra character.  The villages are bounded by rivers and roads: red brick row houses suddenly appear, the tall central church, a station platform, water, then more fields.

In contrast, the towns and cities are all very individual, winding streets and pocket greens, eroded defense walls alongside eccentric glass offices. 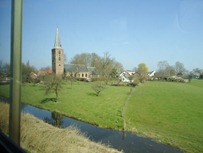 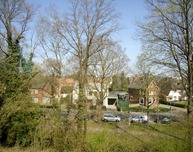 In contrast to other parts of Europe, the central farmlands seem less interesting than the villages and cities.  Nebraska still has echoes of the parries, Cambridge the Fens: the Groene Hart was likely vast river deltas and marshland, now gone except for the sand and the canals.  It’s beautiful in its own way as the flowing trees and ripening fields come back to life after winter, but I still tend to linger among the village shops and festivals as Easter approaches.