There was a time when your maintaining your good name, your reputation, was an essential part of being in business.  Those were days of neighborhood storefronts and face-to-face customer contact: people came to know you over time and to build trust and affection for what you represented.  Businesses were based on family names.

The advent of mass media gave businesses much greater reach to find customers, and so reputation gave way to brand.  Companies became known for what they did rather than for who they were; names increasingly reflected function.  Public image, press relations, and ad presence fostered the “Know, like, trust” progression.

A parallel evolution happened with personal interactions: we were once know as neighbors, then as office colleagues, and now as Internet friends.  As we become increasingly distant from our contacts and the number of connections grew past our Dunbar number, frequent and sustained personal contact faded.  We needed branding.

What do you want to be known for?  Does your online search say that about you?  Are you appearing in the right contexts, so that you are known within the community?  Are you an influencer within that group?

These aren’t abstract questions.  As we define ourselves by our personal interests and activities, our business services and achievements, our scope for opportunity and reward, connection and referral, follows.  There are a growing number of channels for social and professional signaling that can consume ever more time to maintain.  Notions of productivity and return on invested time begin to sneak in.

I first heard about it on a Slate Culture Gabfest, and took it for a spin this week.  The service purports to scan your Internet presence and to rank you as a communicator and  influencer, 0 to 100.  20 is average, over 50 represents real power.  The algorithm (proprietary, changing)  looks at Twitter, Facebook, Blogs, and other social media to determine the reach of your connections and the responses you elicit (retweets, Likes). 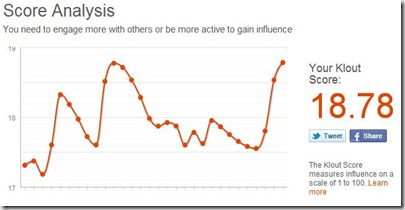 Klout decided that I was an influencer for iPads (I don’t own one) and Religion (I don’t have one).  I’ve since convinced it that Travel, Entrepreneurship, and Science /Technology are a better fit.

On the whole, it seems to judge based on linked responses (comment, share) rather than on actions produced (go, buy). As such, I’m not sure what Klout is really measuring, or the value (relative or absolute) of a particular score or trajectory.

Still, Klout is likely a harbinger of the future.  Once you score and rank people, then people want to compare and manipulate scores.  I’m reminded of how Lenny’s life in Super Sad True Love Story was reduced to a set of scores based on his credit, personality, sex appeal, and social connections.  Will we come to be defined by algorithms that constantly assess our fitness and performance for the niches that we choose for ourselves (or that get chosen for us)?  There are rumors that Klout scores are already being touted by candidates for marketing and PR positions: at what point will these scores begin to carry real professional weight?  And can they be used prescriptively (identify a mentor; target who gets moved up the customer service queue)?

The only certainty is that it will happen. ‘ Gimmie a +K.

Oh, this can get addictive – my daughter and I are both at 38 as the algorithm gets traction on our networks.  A good article in Wired that puts a bit of perspective on it all, and three alternatives (none quite as good as the (still incomplete) Klout: Kred (of course), PeerIndex, and Traackr.

<sigh> this is going to happen: it’s just aggregation…