When you shop for vegetables, what do you look for?  I have to admit that when I go to the Albert Heijn, I tend towards the vine-ripened ones: the stems suggest a fresher product and a more organic origin.

If I thought about it, the tomatoes can’t be picked by hand on some small Italian farm: there are just too many outlets for them, the price is too low, and they are available all year around.  My second guess would be a greenhouse in California, or it’s European equivalent.

Which I discovered on a recent swing through Andalucia. 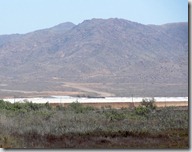 The area looks a lot like California at first glance, perhaps more like Baja:  Dry brown mountains, scrub desert, brilliant white sunshine.  There’s a line of white development across the base of the hills almost everywhere you look. 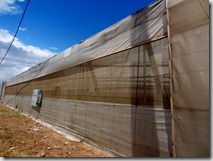 On inspection, these are huge plastic tents, stained brown by the blowing dust.  They have screened sides to circulate air and seem absolutely deserted.

It reminds me of the science fiction scenes where colonists on desert planets set up fragile food factories and favor them with careful rations of water. 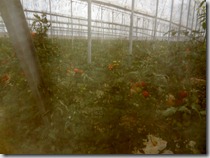 The reality is similar: marching rows of tomatoes, ripening beneath the glowing white ceilings. 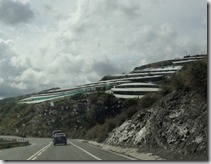 Driving along the coast, the scene enlarges and repeats itself.  Huge tents march up the slopes of the hills, nestle between buildings in towns, and sprawl across the narrow coastal plains to the water.  They absolutely cover the landscape. 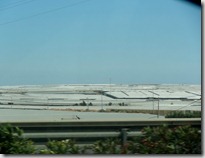 I don’t think I’ve ever seen arming this intense or widespread.  Wikipedia says that 15% of the world’s cultivated tomatoes are grown here, using this method, and the extent of the tents is growing at double digits per year.  There is a vast system of irrigation, originally drawing from aquifers and now from desalinization, that nurtures the crop, and an enormous army of people who pick and pack the harvest.

In photos from space,  above right, the white plastic tents blanket the countryside south of Almeria, completely obscuring the ground beneath.

I have mixed feelings about this: I like the miracle of having tomatoes throughout the year at my local store at reasonable prices.  But it is based on a system that, on the artificiality and scale of it, feels forced and unsustainable.  I’m reading to learn more about the ecologic and social impacts of the process, but it was a wholly unexpected and thought-provoking truth behind the simple grocery stand.