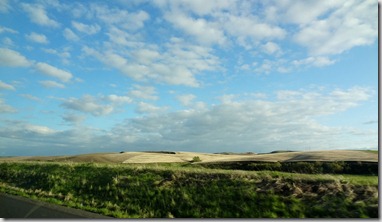 I’m back in the US this week, looking forward t0 a combination of graduation, medical, and business that should be lively.  My plane dropped into Seattle last night and we set out for Eastern Washington this morning, a five hour drive into the rolling Palouse farmlands.

I’ve been limping along with an old Sony camera for over a year now, and have been looking for an upgrade for the past six months.  It takes time to sort features and wait for a good price – fortunately it all came together just ahead of this trip.  I bought a Sony HX-9V on the basis of it’s mega-zoom, low-light performance, and color balance and gave it a workout during the drive.  I really like the way it handles contrasts, twilight, colors, and detail: it’s a little slow to start and between shots, but I can live with that if I get good pictures in difficult light.

It was also a good chance to compare US rural villages and farmhouses with their Dutch counterparts.  The Dutch really do tend towards low and long farm buildings as compared to the square peaked US style.  Fields are plowed in arcing contours around the swells of the Palouse, while the griddle-flat Netherlands follow geometric grids.  The Dutch irrigate from canals cut through the fields; the dryland farmers irrigate from above with huge rotary sprinklers. 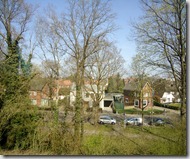 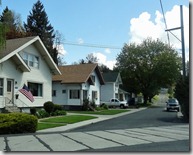 And it was nice to find Random Road Art scattered around – this a giant wave made from canoes along the river in Clarkston and a “Codger Pole” in Colfax to mark an ancient football game. 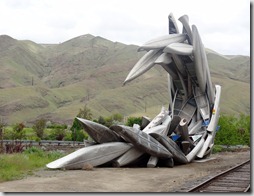 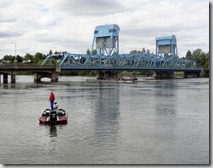 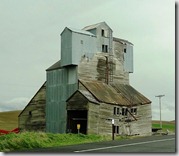