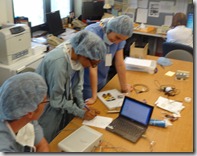 …and with a hacking cough.  The combination of airplanes, jet lag, long days, and shifty weather will do it every time.

It was a good visit to the US: a lot of work on the technical and clinical aspects of the T4 project and the first meeting of the whole team in six months.  We had the agendas and prototypes tee’d up and forced decisions on major issues, so there’s consensus and a clear path ahead.  Fundraising should close in the next couple of weeks and that will bring some more people alongside the project, easing the administrative load.

Both Detroit and Chicago were very hot, 95F (35C) under sunny skies.  The UK, in contrast, is still cold, wet, rainy – I suspect that the Netherlands will be similar next week when I get back to Amsterdam and Maastricht.

It feels like everyone’s circumstances have soured with the weather.  People seem to be having a lot of relationship problems, work problems, health problems, life problems.  Most of the time I find out about it on social network status lines:

Life: unexpected things, tough to deal with. The only thing one can do is pray that the lord reveals the path I must take.

I feel badly for friends running into problems of this magnitude, but have no idea of the circumstances or what would help.  Then, too, I think that people forget they have an audience.

TSB-security went psycho on me in Detroit.  I opted out of the full-body scan and was struggling to keep track of my equipment as it went through x-ray belt.  Before getting frisked, I asked to inventory my things: the security guard took offense, challenging whether I was accusing him of stealing.  I make 50,000 a year: ‘you think I need to be stealin’ your stuff??  I tried to wave it off, he took further offense, and finally another guard had to came over to intervene.

Maybe it’s the heat, but people forget they have an audience.

The UK internet connection is, once again, broken.  BT says that it’s an “exchange problem (we regret the inconvenience)”.  They expected it to be solved by Wednesday, then Friday, now Sunday. I tweeted displeasure and BTCare picked up on it quickly (unfortunately, their solution was to ask how many blue lights on my modem).

Meanwhile, I’m slurping internet off the coffee shops while ordering double-mocha-frappa-somethings.  ‘Hard to run a business from the mall. 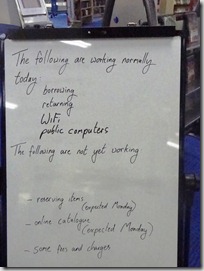 It seems part of a larger trend of Things Not Working.  Three of my Delta flights were delayed due to maintenance (3 hours coming back from Detroit because of a clogged sink).  The trains are still having problems with overhead wires.  The rental car agency had to check us in by hand because the computers went off line.  Even the Cambridge Library is having to post what services are up and which are down.

There’s lot’s to catch up on in the coming days – in between midsummer weekend celebrations, now coming into full swing on the outskirts of Cambridge.