Queen Elizabeth celebrates her 60th anniversary on the throne this week, her Diamond Jubilee and only the second British monarch to have one (Queen Victoria was the other).  Predictably, it dominated the 4-day weekend, with extensive coverage of the Flotilla, the Concert, and the Thanksgiving Service.  I give her credit at 87: she was on top of it all throughout.

I dropped back into Stansted on Sunday and joined a neighbor to watch the boats.  Unfortunately, BBC cut away to interview random bystanders continually, when I wanted to know

more about the history and people on the boats.  The weather  was absolutely awful, January cold and rain: the poor Philharmonic and Choir bringing up the end was thoroughly drenched (click the picture to hear the song). 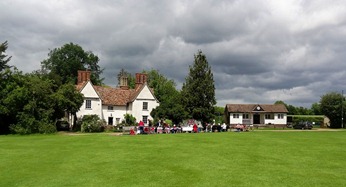 Villages across the country sponsored local celebrations today. Barrington had a picnic on the green (above); Shepreth and Orwell threw parties in the town halls.  Not a big crowd, but a happy one, bundled up warm against the wind.  There were flags and decorations and a toast to the Queen.  They told me how nice it was to have “a Colonial” attendance (I’d considered being a Naked Savage instead).  We weren’t organized enough to have a cricket match, treasure hunt, or croquet tournament, so everyone drank and ate and caught up on the latest gossip. 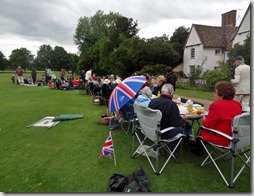 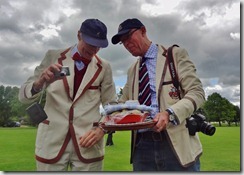 Beacons were lit across the country at 10pm: we went to the nearest hill at Orwell to watch the lighting and the fireworks. The quarter-mile hike out of town was a challenge for many by that hour, and there was a lot of singing-without-words and false-spotting-of-nearby-beacons.  The actual ceremony, precisely timed to 10:01 (Orwell managed to get their lighting classified as a Trust Event rather than the less prestigious (and later-lighting) town event).  There was an impressive display of fireworks, the moon rose on cue, and everyone wobbled back down the hill to conclude the evening. 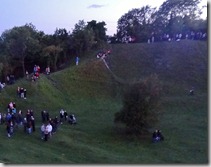 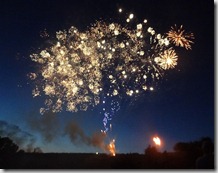 And, in related Dutch news (as covered by the British), Queen Beatrix attended the Sovereign’s Lunch celebrating the Elizabeth’s Jubilee several weeks ago.  Princess Maxima spoke at the International Conference of Insurance, giving a speech about the importance of financial inclusion and education.  And Crown Prince Willem-Alexander apologized for participating in a toilet-throwing contest on Queen’s Day, saying he felt shame at playing while billions still lacked toilets.