I had our lead engineer / project manager along from Maastricht throughout the visits to Detroit and Chicago last week, and it was an opportunity (for us both) to see how our preconceived notions of the US and our cross-language experiences compare.  It was really interesting, we had long talks over meals and car transfers to talk about perceptions and, as always, overseas travel is broadening for everyone involved.

On the Trivial But Expected side, the low price of gasoline (and of  purchasing a car), the over-size of meals (Chicago-style deep dish pizza), the length of the baking aisle in a grocery, the crumbling infrastructure in Detroit, the baffling question “soup or salad?”, the tendency of US drivers to choose any lane (and stay there) on the highway, and the weakness of US koffie, all matched expectations.

Among the Trivial but Unexpected aspects, the harmless (but lethal-looking) road claws that protect rental car exits are still a gut-clench for the Dutch as I sail over them.   The general lack of road signage, the prowling radar traps, and the separated houses, 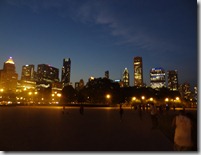 each on their own lot rather than joined in a row, all provoked comment (and all the drawn curtains).

Significant but Expected:  Language is the big one.  My colleague is fluent in English, studied in Britain, but Americans talk fast and monotone to her ear.  The words tend to run together, and when multiple conversations start around a table or someone starts interrupting someone else, it get’s impossible to follow.

I have the same complaint about trying to follow the Dutch: I think that when conversational patterns devolve into multiple interacting streams, it’s very hard for non-native’s to parse.  And trying to keep up can be really tiring.

Finally, Significant and Unexpected, Americans seem rude.  To the Dutch!

We always claim that the simple directness widespread in the Netherlands has no counterpart in the US.  But the issue seemed to have two sides for her.  One was that the tendency of Americans to interrupt, complete one another’s thoughts, veer into sidebar conversations, and turn attention rapidly away from one person and towards another mid-discussion borders on disrespect.

Good friends also tease one another when they disagree, probably to lighten the mood and indicate that the topic  isn’t jeopardizing their friendship.  But to Dutch ears, “You know where you can put that!” is pretty adversarial (Our Dutch colleague asked one of the group if they were still genuinely friends with the other after a couple of exchanges).  I’m used to the British requiring a lot of social grease in order to fit in, but was surprised that the Dutch had some of the same concerns.

The other issue was politics.  I want to touch on how the US politicians are using Europe as a scapegoat tomorrow, but the Conservative / Liberal divide is the focus today.

In our group of four, we have two people very right wing and two very left.  We generally avoid political discussions because we recognize that no two will ever change the minds of the others.  But, inevitably, there would be an insult about Obama, a nod to liberals being soft-headed, a disagreement about the banks and taxes.

Over breakfast, we ended up talking about health insurance, and they advocated the Rynd-ian opinion that people should only have access to the health insurance that they were willing to pay for.  What about disabled, elderly, children?  It’s the responsibility of the disabled, the children, the parents to take care of family and friends, not the rest of society.  If a few people without insurance died because they didn’t buy insurance, the rest would buy soon enough.

Needless to say, this doesn’t fit the Dutch social model (and I thought it was embarrassing; she commented that politics is not something discussed with acquaintances), but it’s a mirror of the debates that polarize American society today.  The extreme positions and heated rhetoric, the personal and visceral way that opinions are expressed, has gotten more and more prevalent.  Now, I think it’s  also coming to define American attitudes and characteristics for others.

email
« Back from the travels
Meanwhile, in Cambridge… »
Radar Weather