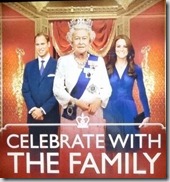 The Jubilee entered it’s final day yesterday, a wind-down into royal church services and local buffets.  The rains let up and a sullen sun emerged weakly behind smoky clouds.  The Royal Oak moved its restaurant outside for a bar-b-q that was more in 4th of July style than upper-class British: balloons, hot dogs, picnic tables, pictures with cutouts of the Queen.

I was pretty philosophical about it all: the pageantry fused with the four-day weekend to create a fairly agreeable break. We don’t have historic/celebrity events like this, nor do we gather ourselves up for patriotic flotillas and bonfires very often (the 1976 celebration of the country’s 200th anniversary is the last I can think of).  The Jubilee was an agreeable set-piece that didn’t take itself too seriously. 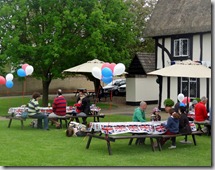 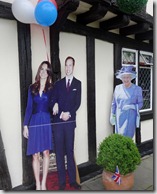 But local people had strong feelings both ways: some put out flags, baked cakes and gave good natured toasts, while others grumbled, resisted, and winced throughout.  ‘Not much middle ground.  It seems a shame: Britain remains an enduring and recognizable institution that has given the world a lot in science, industry, law, art.  The Queen has given over her life to be its public face.  It’s not too much to give her a day’s thanks after 60 years.

Although I did appreciate the joke that she also embodies Cameron’s desire to see 80-year-olds back doing a full day’s work.