Most days, I take at least a half hour to read a Dutch newspaper or magazine:  they fill waiting rooms and are accessible online.  The stories are about familiar things and are pitched close to my reading level.  I keep my Prisma-miniwoordenboek handy and drill down into unfamiliar sentences after a first pass.

But online translation tools are getting better and becoming integrated into everyday applications.  Google Chrome has started pitching up web page translations, and my recent computer upgrade brought me in contact with Microsoft’s tools.  They haven’t replaced my wordbooks but they are improving fast.

So, ‘my quick overview and comparison.

Chrome bases its tool on Google Translate,  my first choice for quick text translation.  The browser senses the language and repaints a fully translated page: original text appears as I mouse over passages.  There are options to see alternative translations or to offer a corrected phrasing to improve the engine.

Babylon and Interglot have free plug-in extensions for Chrome, but they don’t seem to bring any extended function or accuracy.  Similar tools are available for Firefox and IE, but I don’t use the browsers daily.

Babylon is the best pop-up dictionary since you can add all three van Dale handbooks.  Version 9 offers an improved text translation window,  but you have to cut and paste content. 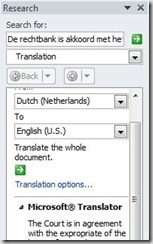 Microsoft Word has a translator built-in: I didn’t realize it until I read a tutorial at How-to-geek.  The tools are found in the Review tab and include a full translator and a mini-popup translator for individual words.  Microsoft uses it’s own Translator by default, although you can change it to use WorldLingo.

Word’s Dutch Language Pack is a 23 euro add-on, available for download through the Microsoft Store. I purchased a copy: it does a good job of correcting spelling but lacks thesaurus, grammar, and proofing tools, so is very underpowered compared to the English toolset.

To compare the four offerings, I gave each the  same short paragraph from De Dagblad Limburger about construction progress on the A2: Onteigenen van flats bij A2 mag.

Google Translate: The court agrees with the expropriation of the last 23 flats on the A2 route, necessary for tunneling under the highway through Maastricht East. The general interest of the Dutch state and the municipality outweighs that of the owners.

Babylon 9: The Court agreed with the expropriate platform flats of the last 23 in the A2-trace, necessary for the tunnelling of motorway Maastricht-Oost. The general interest of the Dutch state and the municipality weighs heavier than that of the owners.

WorldLingo: The court is agreed with expropriating the last 23 flats to A2-tracé, necessary for the ondertunneling of the motorway by Maastricht-Oost. The public interest of weighs the Dutch state and the municipality more heavily than that of the owner eigenaren.

Microsoft Translator:  The Court is in agreement with the expropriate of the last 23 flats to the A2-tracé, needed for the tunnelling from the motorway through Maastricht-East. The general interest of the Dutch state and the municipality weighs heavier than that of the owners.

Google Translate and the Microsoft Translator produced the most readable English, although all were able to extract the main ideas. Difficult vocabulary, tenses, and grammar all compromise accuracy, and detailed semantics are easy to lose as a result.

These tools can be useful, but obviously can get in the way of learning a language yourself.  I use them optionally, to check what I think I understand or to make a pass over Dutch that I’ve written.

Otherwise (and especially in the waiting rooms), it’s my well-thumbed Prism.

Disclaimer:  I have purchased and used all products mentioned in this article; I have neither been asked nor incented to make any comments.

email
« Hangin’ at Heineken
Out amidst the artists »
Radar Weather