I don’t know how I missed this before.

Friends came into town to celebrate their 35th anniversary: they are taking a Baltic cruise departing Amsterdam for two weeks of city-gazing.

Their plane arrived at 6 am from Atlanta, so I stayed at the Citizen M the night before, still a funky delight at a reasonable price and great position.  There’s something about taking tube showers under purple lighting that makes the day okay.

covered strategies for seeing the city.  The Anne Frank Huis, the canal boat tour, lunch met poffertjes, koffie, en appletaart, avondmaal at the Five Flies.  Not typically Dutch, but kind of typical for me.

I demurred on the Coffeeshops, the Red Light district (too rainy for either, really), so the remaining sin was biertje.  And that means Heineken.

The brewery tour comes highly recommended, and it was a cut above most.  There’s a small museum with history and hammering home the tenants of the Brand before getting down to

the serious business of brewing.  First there is a lecture on making beer, with samples of roasted barley and hops.  Then there are brewing vats and ore tasting of hops and barley.  Then an interactive ride through the brewing process.  I was becoming an expert in when and how much Yeast “A” to add during the process.

Finally, to the tasting.  I’ve been through a lot of tours in Milwaukee, England and Ireland, and the Heineken tasting tops them all.  First there was a tasting room with questions about the brewing process: we were rewarded with glasses of beer (2 glasses).  Then a small bar where we traded tokens for beer (2 more glasses).  Then interactive games for a chance to win more beer. 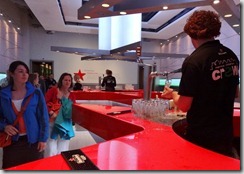 And, finally, a shuttle boat back into the city and another round of beer (this time to appreciate the new plastic bottles: 1 beer).

By the time we rolled off the boat, I had Heineken stamped firmly onto my bubbled brain.  It’s a fun tour and a good diversion for a rainy afternoon – allow two hours to see everything and a couple of more before attempting to operate heavy equipment.

Disclaimer: We purchased lodging and tickets ourselves throughout – I was neither asked nor incented to write this.