Paintballing with Hezbollah describes western journalists’ attempt to understand the Lebanese military situation by engaging in, well, a paintball skirmish under a Beirut shopping mall.  It’s pretty good reading: unsurprisingly the terrorists cheat, bringing in flash grenades and capturing journalists for human shields (I’m not making this up).  Still, the journalists battle to a draw and get their insights (distasteful as some of it is).

I feel a bit the same way this this week, taking on two of my favorite shibboleths: Health insurance and Dutch lessons.

The health insurance crisis was precipitated by letters from our provider saying a) they were still struggling with the coding of a claim from my surgery in Lugano three years ago, and b) that they were going to drop my daughter off of our health insurance at the end of the month.

Now, I’ve spent years exchanging mail and engaging with my long suffering Italian friends to facilitate BCBSs claims processing for Lugano.  My daughter had the misfortune to graduate college, at which point she become ineligible for my policy.

I think we found solutions: the Swiss can’t find any outstanding claims and my daughter is continuing as a full time student, but we were honestly facing collectors and Medicaid, respectively.  I ended up returning to the new Affordable Care Act (ACA) to see what happened to the maxim that dependent children stay on policies until they are 26.

The act makes interesting reading: there is nothing in there that should raise anyone’s ire.  Even free-market Forbes calls it “little more than a successful effort to put an end to some of the more egregious health insurer abuses while creating an environment that should bring more Americans into programs that will give them at least some of the health care coverage they need”.

It is amazing (and stupid) that people should be so viscerally opposed to this law when they more likely support every policy buried inside it.

My year of Dutch study hasn’t produced stellar outcomes either.  I’m unquestionably better (and accelerating), but it takes time and persistence.  The inburgering has turned out to be wholly impractical, focused on job-search skills and classroom-centered.  Last night I found that my access to the online tutorials had been cancelled, six months ahead of expiration.

What (I think) I need is a way to have more conversations, in writing and in person, to supplement my reading newspapers and listening to broadcasts.  Friends have lives too: it’s not practical to impose hours of practice on them.  But I chanced onto an instructor who charges 7.50euro per hour to just sit and talk, correcting pronunciations and engaging in spontaneous give-and-take.

It’s working out very well.  When I’m in Maastricht, I go see her daily.  Otherwise, we write emails each evening.  Sometimes there’s a structured assignment, other times a discussion of a news story.  But it’s giving me a good leg up on composing a thought and expressing it, the hardest thing I’ve struggled with.

I think I must be the only American who comes to the Netherlands and pays for an hour with a Dutch woman just so that I can talk with someone.  My friends joke that it’s an over-50 thing.

A couple of other resources to consider (I buy and use all three myself, nobody asked or induced me to write this):  None are particularly expensive, all have demo modes that you can use for free to try the product. 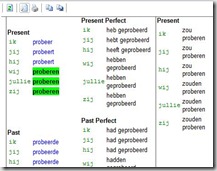 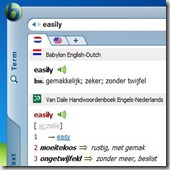 Verbix: This is a web-based or desktop verb conjugation tool, great for composing zin using toen instead of dan.

And, as a bonus, Scientific American reports that translating a problem into another language may improve the quality of decision-making.

Okay, back to life’s paintball games…

email
« Tilting at Europe
Under the weather »
Radar Weather