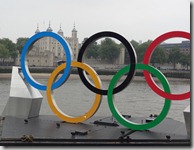 “How about a meeting on Friday?”, suggested the physician I was recruiting for our advisory group.  Absolutely: I’ll be there at 3, I affirmed, ignoring the small ‘o’ I’d put in the margin of my datebook.

Olympic Day: Do Not Enter London For Any Reason.  That was what I’d meant it to signify.  Unfortunately, now it meant leaving early and taking my chances at London Bridge a few hours ahead of the Opening Ceremonies.

I was very pleasantly surprised. 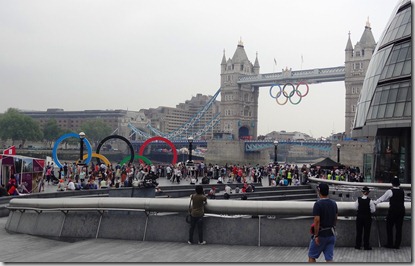 The trains ran on time, and at the usual times.  There were seats.

The Tube stations were only moderately filled, and even then with mostly families with small children and suitcases.  The floors of the stations and rail cars were immaculate, the walls had been scrubbed.  There were pink-trimmed signs and pink-cheeked guides everywhere. 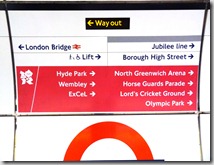 There were a few signs of final trim still being put into place, but the Jubilee Walkway along the Thames was only modestly full.  A few lost bicyclists scattered a few pedestrians; children posed with the mascots.  Reporters posed with the Bridge. 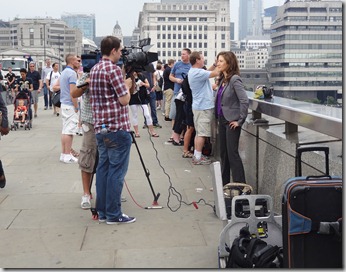 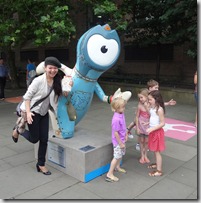 There was even a bit of sunshine.

I think it all bodes well for the Games.

It was embarrassing to have to explain Mitt Romney’s disquiet: why should he parachute in to assess London’s readiness?  At best, it was a distraction from fretting about how well things might go, and gave politicians a sound bite (Cameron’s putdown was particularly delightful).

I don’t know what demon seized Mitt: I think he’s been in negative mode against the government at home for so long, he forgotten how to be a gracious guest here.