The 2012 Olympics got underway last night – we all gathered around the tube to watch the 4-hour spectacular until well past midnight.  I liked it a lot (even better on reruns when you could see a bit more of the detail in it): It was very quirky British fare,  good humored and self-important at the same time (juxtaposing The Tempest and Mr. Bean for a baffled worldwide audience).

The entire show can be seen on the BBC iPlayer and the Guardian has a good highlight reel.  Unfortunately they only work from within the UK so if you’re outside the country a proxy connection is cheap and worthwhile.

The initial flyover / animation down the Thames from origin to park was a nice orientation to it all, followed by the bursting balloons countdown over the clusters of children waiting for the bang. 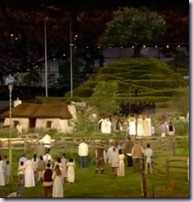 Pastoral Britain was a bit Hobbit-like, until someone noted that it’s basically a duplicate of my base in Barrington – right down to the top hats and country skirts.  The emergence of the chimneys recalled the cement works outside of town, too. 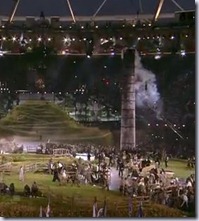 I really liked the industrial revolution sequence that led up to the forging of the rings: Very Tolkien.  The music, choreography, lighting was really the highlight of the opening ceremonies, apart from the athletes themselves. 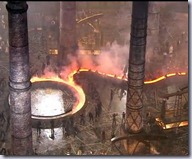 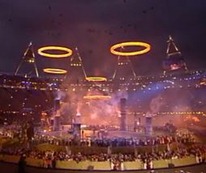 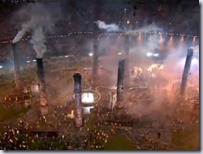 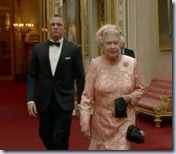 Bond, Queen, Corgi’s was a nice smaller moment, and the helicopter was a calculated crowd-pleaser.  She really does need to smile, just a bit? 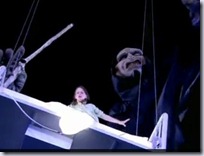 I was lost during the tribute to the NHS: it didn’t feel like it paid tribute to the Service or the children, veering off into weird scariness.  And is Rowlings really the greatest living UK author (I know she won a magazine poll, but…) 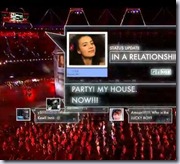 I felt similarly adrift during the music and media section – I did perk up at seeing Tim Berners-Lee, though. 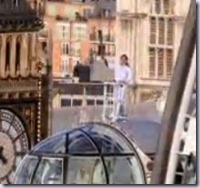 I’m a pushover for torch relay highlights, though, and the close with Beckham grinning maniacally at the helm of the speedboat was fun.  I hope it wasn’t CGI though. 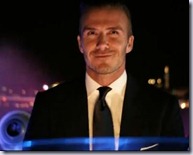 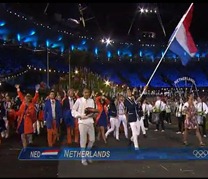 The Athletes Parade went on and on (and sometimes seemed to contain few athletes), but I enjoy the national uniforms, the tiny countries, and the enthusiasm of the participants. 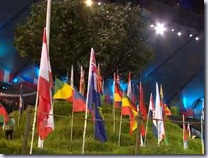 …and the butterflies and the final running off the torch were good caps for the ending. 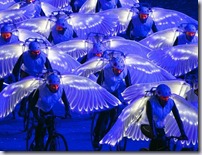 All in all, a nice evening start to finish, and, by the end, I could even understand the mysterious logo that has looked like some puzzle assembly of the London neighborhoods (squint and you’ll see the 2-0-1-2) 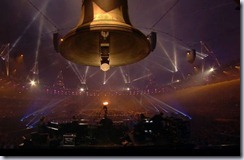 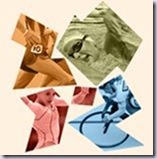 Now if I could just figure out the mascots, nowhere seen during the ceremonies…