Ancient Central American calendars ended in 2012, leading to predictions of global apocalypse: the eponymous movie predicted a deluge of water cresting the Himalayas.  In The Day After Tomorrow, water inundated New York City as the Gulf Stream reversed.

Cinematic renditions exaggerate the conditions, but there is no denying that this has been an exceptionally cold and wet season.Ironically, while the United States suffers under heat, draught, and violent thunderstorms, summer has been completely absent in the Netherlands. 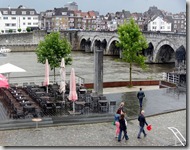 The Maas terrace café’s are open, but empty.  The river is running high for July, swirling muddy beneath the St. Servatius bridge. 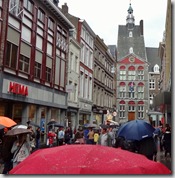 A meadow of multicolored umbrellas carpets the pedestrian streets – shoppers hurrying, huddled over, between the showers.  They stop into storefronts when the rain turns particularly heavy, shaking the drops off of their coats and wiping their glasses. 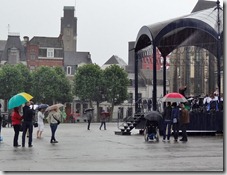 On the personally negative, the wet weather has put something into the air that is tweaking my occasional asthma: I’ve been waking at night unable to breath and coughing (This month brought to me by the Dutch words allergie, hijgen, hoest and niezen).

On the positive side, when the sun breaks through, it’s glorious in comparison. 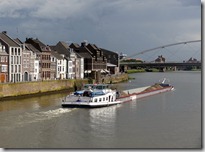 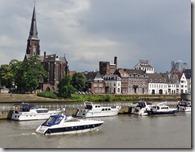 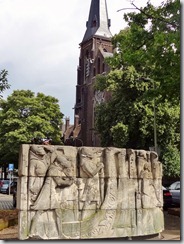 It’s just a lot too little.  People are making August plans to head south, Spain, Turkey, even Greece, in search of a bit of warmth.  Thus, people readily know where to start the conversation when a colleague sports a tan.

For the rest of us, it’s a glance heavenward to see if the clouds have finally moved through; a glance downward to avoid water pooled on the saturated ground.

And remember, it could yet get worse.  The Mayan calendar doesn’t end until December 21st, 2012.