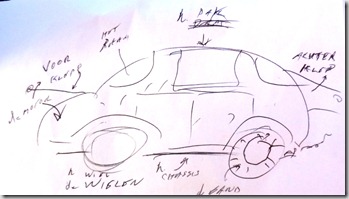 I groped for the right word for a “body” that wasn’t made of living tissue as lichaam was.  I sketched a car and we went around the parts, naming each in turn.  But “body”…

I was distracted, drawing the car, naming the parts, getting the articles right.  And that may have been just enough to improve my Dutch performance.

I was listening to a piece on NPR last week: the issue was “Why are the sciences male-dominated?”  A researcher taped thousands of interactions of male and female scientists and found that women sounded less confident talking about their research with men.  It didn’t happen with women, nor with non-research topics with men.  There was no difference in how men addressed colleagues of either sex.

The psychologists attribute the cause to stereotype threat: that women believe that they are being judged as less capable by male colleagues.  They reserve a small portion of their attention to monitor and second-guess their own conversation, decreasing their performance.

The worry becomes a self-fulfilling outcome. 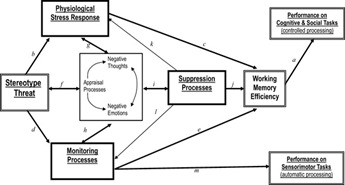 Back to Dutch.  I know that I become self-conscious when I try to speak Dutch: I watch what I do more carefully, speak more slowly, certainly appear less capable.  A couple of weeks ago, I joined Jules for dinner: she has been making great progress towards completing her NT2 while I am still plodding forward. Ordering dessert, I wanted mine without whipped cream.  I thought about it and offered geen slagroom: she and the waitress both corrected zonder slagroom.  Of course it is, but I talked myself out of it by over-thinking it.

I think that the Dutch encourage this problem: their language is not as difficult as many, but they constantly remind you how hard it can be to learn.  I think it reinforces a bias away from trying: when I need to conduct business I have to communicate and I know that they will understand my English better than I can express ideas in Dutch.

I think this is why mu Dutch Buddy arrangement is working so well. Every day that I am in Maastricht, we spend an hour talking.  Most nights when I’m out of town, I write her a letter.  And I don’t worry about getting it wrong, the little voice shuts down, and I perform better.

Stereotype Threat is a defense that probably crops up in many guises for most expats.  Recommended interventions include raising awareness of the effect, convincing people that effort leads to success, thinking about a positive aspect of yourself before engaging, and building a sense of belonging

through other means.  A shot of whisky may also help.

And, a day later, my teacher and I both confirmed that an auto body is de carrosserie.  Unfortunately, both of us found that only our male vrienden knew that.