Week by week, month after month, eurozone financial crises cycle through the news, traversing one country after another.   European leaders meet repeatedly to negotiate the final answer, which always involves gigantic loans offering limited reassurance to governments and markets.

I’ve understood the problem with oversized loans, limited revenues, and the payment gap that is causing countries to lurch towards fiscal disaster.  But it wasn’t really clear how the banks fit into all of this: why aren’t bank issues more easily separable from sovereign ones?

The New York Times has published an outstanding info-graphic that shows some of the answers.  In their telling, weak economies drag on both the countries and the banks, decreasing domestic output (GDP) and tax revenues for the former, increasing bad loans and the cost of money for the latter.  The problem that I hadn’t realized is that the bank’s assets have become much larger than the  gross national product in many countries, so their problems simply became larger than national economies had capacity to handle.

The numbers really are amazing.  The banks borrowed so that they could lend more than they had in deposits, and more than 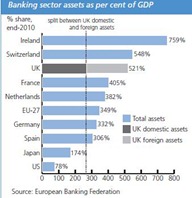 The two are not completely independent: banks spin off money that contributes to the GDP.  In the UK, that contribution is about 14% of the total (manufacturing contributes 12%).  But when bank assets grow faster than GDP, it’s a delicate bargain. Bank assets are again growing faster than GDP, raising the load that will need to be bailed out if loans repayments and asset values drop again.  It seems like a statistic that would be worth following (but a surprisingly hard one to ferret out).

The NYT analysis is quick going and intriguing in many ways – ‘worth spending 15 minutes thinking about.  Too interlinked; too over-leverged.  And reforms don’t go a hair’s width towards addressing it.