I’ve been surprised a few times this week by news items and events and that go against my assumptions.  So, today’s recounting that things that are not always what they seem.

Perhaps, they never are.

TripAdvisor recently integrated their reviews with Facebook’s Timeline, sharing searches, reviews and bookings governed by user-controlled privacy settings.  For one of my friends, this was the result:

It points up the difficulties of managing the spread of information once Facebook becomes involved: it flows too many directions for anyone to be able to control it.

So, despite the supposed advantages of exchanging reviews, I’ve disabled it all.  Again.

The US Chamber of Commerce represents small business interests: overseas, they are represented by American Chambers of Commerce, AmChams, in 102 countries.  The local Dutch chapter, along with other international business clubs, is linked at DutchNews.nl 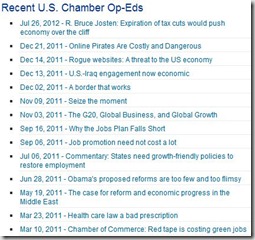 The US parent has a strongly conservative bent, fulminating regularly over regulation, debt, green and healthcare proposals that they assert kill jobs and small businesses.

It turns out that this, and many other aspects of the modern corporatist and capitalist conservative movement, trace their intellectual origins back to 1971.  Lewis Powell, then a Virginia attorney (later a Supreme Court Justice) authored a memo for the Chamber of Commerce advising them on how to respond to antiwar protests that had spread to include anti-business themes.  Jane Mayer writes in The New Yorker:

The greatest threat to free enterprise, he warned, was not Communism or the New Left but, rather, “respectable elements of society”—intellectuals, journalists, and scientists. To defeat them, he wrote, business leaders needed to wage a long-term, unified campaign to change public opinion.

I’m not part of the tin-hat movement, but it all starts to make sense. A key to longer living is healthy eating  and regular exercise, mental activity and a positive outlook.  And, maybe, learning a foreign language.   A BBC  documentary this week focused on the root physiologic causes of premature aging: high cholesterol, high glucose, and high IGF-1.  To bring down levels, they recommended no particular diet, but instead, no diet at all.

Their report suggested that fasting is the shortest way to longer life.

A 3.5 dy fast dropped all three levels by about 50% in their demonstration, but the effects only lasted for a few days.  The process was so personally difficult that health reporter Michael Mosley admitted that he could not go through it again (I’ve done a couple of days, perhaps half his marathon).

A sustained 5:2 regimen worked better.  The rule was intermittent fasting: eat what you want for five days out of seven, and only a single 600 calorie meal on the other two days.  After six weeks, he’d lost a stone (14 lbs) and again lowered his circulating levels of LDH cholesterol, glucose, and IGf-1 by half.

It’s an interesting, if counterintuitive demonstration and a tempting practice to try.  I suspect that my schedule would accommodate (encourage) a two-days-off cycle each week -  no  indication of how to merge it with exercise and Dutch lessons, though.