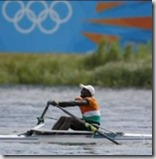 I think the nagging doubt started while watching Hamadou Issaka.

Olympic athletes are the best in their sport, dedicated, hardworking talented people who have given years of their lives over the ceaseless pursuit of winning.  Hamadou Issaka was different.  A Nigerien rower who took up the sport  months ago, he finished a very slow, distant last.

It’s easy to  say that “Issaka the Otter” was unprepared, but he got me thinking about the dozens of athletes in every event who also finish out of the money (literally, in the case of US athletes).   Winners achieve fame and fortune (media roles, endorsement contracts, brand royalties).  But, as Salon notes, "the winners always beat someone someone who doesn’t meet or exceed expectations — and that is the story of most Olympians”.

Most of the training and sacrifice, then, ends in loss and obscurity.  So are their stories inspirational or cautionary?

My son really enjoyed Little League (organized baseball teams for children) when he was a child.  about the time he turned 10, though, the minority of kids with talent (and their parents with ambition) took over the teams, consigning all of the other kids to occasional participation while they chased distant athletic scholarships and sports contracts.

I can think of three counter-arguments to the question of whether loser’s lives have been wasted in pursuit of something that they are unlikely to attain.

I think that all of this could be said equally of competitors from Jordyn Wieber to Hamadou Issaka.