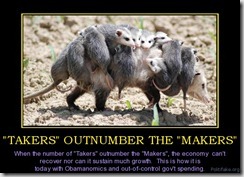 I’ve been thinking a lot about this supposed division of economic classes, an argument being pressed by Mitt Romney and his Republican allies this season.  If nothing else, it’s a resonant slogan that, like “Cut and Run” frames the issue in a way that prevent debate.  I wish that the left could be as deft.

I know that life is more complex: the ‘47%’ are not pure ‘takers’, nor the 53% all ‘makers’.   Jared Bernstein had a insightful essay on his economics blog, Makers, Takers, and YOYOs, that I think captures the real ambiguity well:

All of us need some help at some point.  Sometimes that help comes from family, sometimes from government, typically from some combination of both, but no one goes it alone.  If you’re lucky, have people who care for you, or have the wherewithal to seek it out yourself, there will be a ladder in front of you at some point.   That doesn’t make you a taker—you’ll have to climb it yourself.

Right now, I’m hearing a lot from people who were born on third yet think they hit a triple.  They’re telling me that the role of government is to kick out those ladders.  But they are wrong.  The role of government is to make sure those ladders are there, along with insurance against ill-health and penury in old age, a safety net when the economic bottom falls out, investments in the public goods the market won’t provide, protections against negative externalities like pollution and market bubbles that private markets fail to price in, and so on.

Even more striking is the way that the debate is turning traditional class positioning on it’s head.  From The Time Machine to The Hunger Games, social philosophers and commentators have imagined a world were the working poor support the idle rich.  Thee were Makers, the Morlocks; there were Takers, the Eloi.   The new framing (also commented on by the Economist) casts the rich and powerful as the Makers, supporting a vast underclass of Takers.

I see their purpose in spinning this illusion, the way it cements the class distinctions with a mortar of goods and guilt, complete with a welcoming meritocratic gate through which those clever and industriousness can enter.  But it runs so counter to actual everyday experience for most people that I wonder what sustains it.