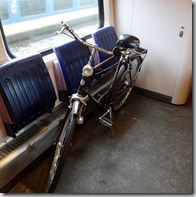 Actually, I’m not sure why this never came up – I ride the train and my bike a lot, just seldom the two together.  But the IND required me to get a new uittreksel documenting that my business is still in business, and the KvK Limburg has decamped to Sittard, so the bike make the most sense for getting the kilometer or so between the station and the office.

Taking a bike onto the train is pretty easy: you buy a supplemental day-pass at the station, paying six euros for the bike (it works the same for a pet).  Bikes aren’t allowed on the train during morning and afternoon rush hours, and you have to find the right door (marked with a bicycle) to board.

Beyond that, no worries.  My only mistake actually came later in the afternoon. 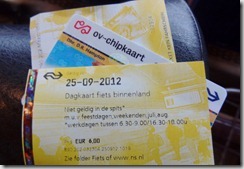 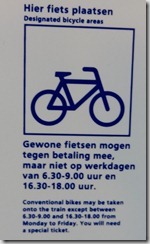 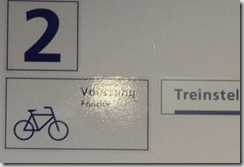 I was cycling from the station to an afternoon meeting at the University when the *thunk-thunk* of a flat back tire started.  I pulled in to put some air in, but that lasted only 3/4 of the way to my destination.  So I dropped the bike at the Maastricht Randwyck station and walked to the offices.  Afterwards, I returned to put the bike onto the train only to find that I’d left the dagkaartje back at the apartment.  Nothing to do but pony up another six euros.

I took advantage of the tire repair to fix the broken rear light and kickstand, so that my oude fiets is at least functioning as well as a new one.

Or, at least, legally.

IAmExpat notes that a discount is available on train cards: half-off if you purchase one before mid-October.  This is a great deal in every way – the train card gives 40% off non-peak travel and you can share the discount when traveling with others.

An OV-Chipkaart needs to  be validated at a Veolia ServicePoint before it can be used to get a discountn Veolia buses and trains.  It takes about a minute and costs nothing: in Maastricht the office is right across from the train station next to the Grand Hotel de l’Empereur.