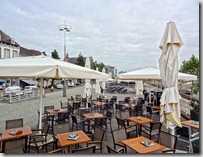 The past few months have seen a lot of turnover among businesses along the ‘skade.  The Dutch economy officially tipped into recession months ago, doubtless accounting for some closures.  Others are victims of government policy or bad business ideas.  But the dying shopfronts are quickly replaced by new ones, and the Maastricht waterfront still feels healthy and prosperous. 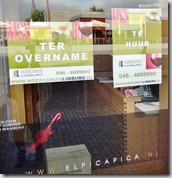 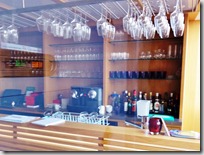 I chalk this one up to bad business planning: it was a high-end 40 euro per person tapas bar that  never attracted sufficient high-end clientele.  In contrast, the new Asian place next door seems to be doing well.

My main worry is that the landlord will raise the rent to compensate for the lost business.

De Nacht, the pole-dancing club up the street, has also shut down, unlamented.  Ironically, the straight-faced Wiener Kaffee, next door, remains.  Local businesses and residences fought this club, only ever open from midnight to 5 am.

People can do what they will do, but it never seemed like a good idea to draw out and concentrate the people who would attend strip clubs onto public streets at 4am.  I don’t have a shred of evidence to back that feeling, but I’m not sorry to see it go.

The drug boats and coffee houses are shuttered, protesting the drug policies of the local government.  The law was aimed at stopping drug tourism but, not so subtly, also tried to force the closure of the businesses.  It forced users to show a residence card, then to obtain one of a limited number of membership cards (wietpas) available for entry. 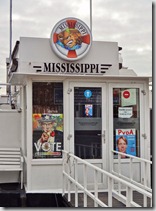 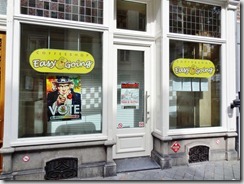 A couple of US friends were in town in mid August and went to down to see the shuttered Mississippi drug barge.  They found the forlorn owner out front, surveying the empty gangways.   He gave them a tour and some perspective (although no drugs), 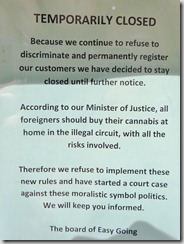 happily answering questions about the business economics and legal arguments.  It made for a great story back home and put a human face on it all here.

Anyway, the businesses took the city to court and, today, Maastricht’s mayor backed down.  Residence cards will still be needed, but the mayor hopes that this will reduce the number of street dealers who have appeared since the ban was introduced.

However, the marijuana pass system is is still planned for the rest of the country, including Amsterdam, in January 2013.  The coffee houses are, of course, campaigning for parties opposed to the wietpas.

‘imagine this platform anywhere else.

‘Closing with two more curiosities, encountered while wandering to capture photos for the day. 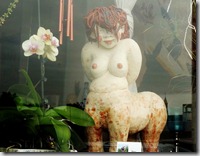 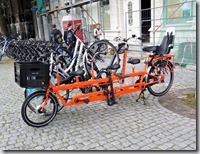 email
« A collection of curiosities
The rules, vs. how they are applied. »
Radar Weather