Of course,w hen the autumn weather turns nice in the Lakes District, as it did the next day, the results are spectacular. 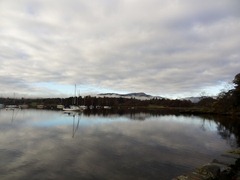 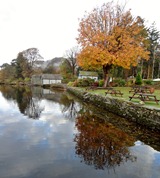 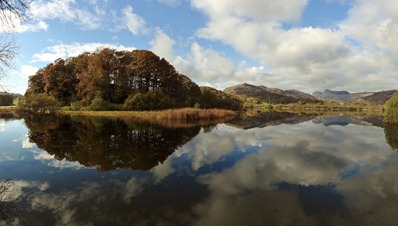 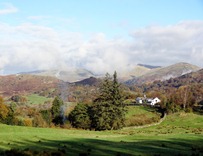 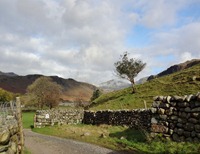 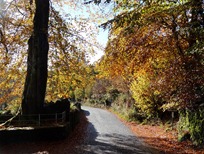 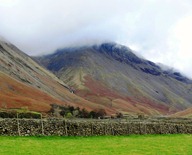 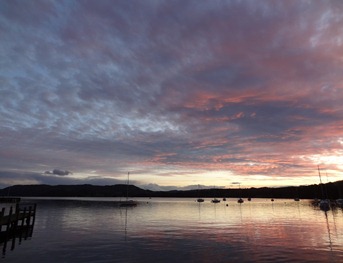 The autumn leaves were gorgeous as the weekend approached, warm and glowing across the city.  Imagine what they would look like in the rolling hills and reflective waters of the Lakes District?  A bit of planning and the visit was set.

To coincide with a day of torrential downpour.

This creates a lot of variations of grey, not well captured by the camera, and dull dark colors even in autumn photos.

As well as water on the lens.

What to do (in addition to keeping the camera dry)?  A soggy day offered an opportunity to take the challenge.

First, the water itself can be an interesting subject, close in puddles, embedded in landscapes, or misting the hills. 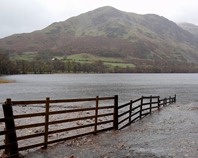 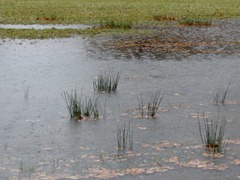 Second, the deeper shadows create scenes with planes of light and dark tunnels.  Light balance is hard, though, and I have to be careful not to aim into sunlight unless I want stark black/white pictures (making tree trunks into clawed feet). 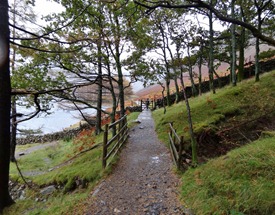 Third, wet objects do have more color than dry ones.  The trick is finding scenes with partial natural illumination.  Using a flash on landscapes is not effective, and post-processing is artificial. 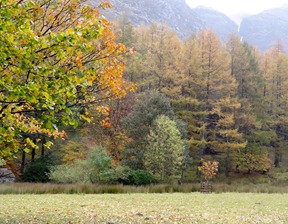 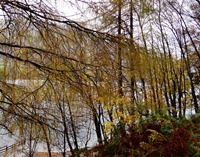 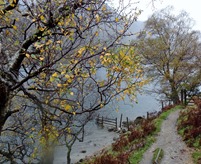 Finally, mist adds areal perspective, depth and distance, and textures skies as they curl over mountaintops. 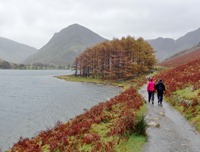 There are photography sites (and here) with further suggestions, but what’s been your experience and tips? 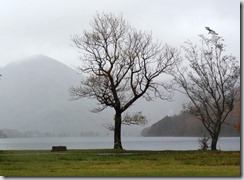 A few sites worth mining on a cold, wet fall weekend.

The Browser:  Billed as “Writing worth reading”, this site offers links to articles, ebooks, and interviews organized into wide-ranging topics.  I’ve found lots to enjoy, from Freeman Dyson’s discussion of how philosophers lost touch with modern audiences to Dieter Bohn’s explanation of how Google is designing predictive search and Wells Tower on being a barista at a Dutch coffee shop (with a C): It’s like working at a Starbucks where the customers are cranky zombies, and a latte costs fifty bucks.  The fun is in finding short articles that you’d have never come across otherwise while waiting on line to see Skyfall.

HSBC Expat Survey:  The 2012 results are in, the Netherlands is number 26, and there’s lots of interesting statistics and perspectives in the improved Explorer.  Transport and healthcare fared well; making friends and setting up utilities were predictably difficult.  I miss the old .pdf format, but I like browsing through the comments and comparing countries.

The Sinica Podcast:  Kaiser Kou broadcasts a weekly podcast from the PopUp studies in Beijing, featuring expats and journalists discussing news and perspectives on China.  I first heard of Kaiser though a This American Life episode, and I’ve listened to about a dozen back shows.  Discussion ranges across issues that are broadly interesting to expatriates: How do you decode local media, How do foreign countries interpret US new broadcasts, How are expat blogging communities evolving?  It’s been interesting to translate the commentary over to my own experiences in the Netherlands.

Quizlet:  With my language exam fast approaching, it’s been key to turn my vocabulary sheets into some sort of drill that I can work on.  Quizlet is a free site that has lots of Dutch language flashcard sets and a reasonable interface for flipping through them: I’ve been able to move some of my sets in as well.  The quality and depth of the decks varies, but it’s a broad resource to tap into.

This week, we moved into new offices and hired our first employees, both huge milestones for the company.  Although technically still pre-revenue, we’re feeling a lot more ‘real’ (and I feel much more responsible – its all a bit sobering to think about).  Still, it’s a quiet thrill when someone asks where we can all get together and we say ‘How about our offices?”

The furniture went into place nicely – the activity areas fit in the way we expected that they would, the internet and phones are up, and the blinds and kitchen supplies are in. 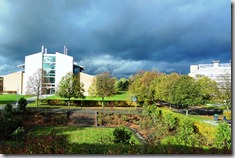 We’re missing a few bits of miscellany (plugs, scissors, coat-rack…) and the printer and server took longer to set up than expected.  The room is a bit echo-y, but there’s a plan for everyone to bring in their favorite (non-family) picture to blow up into fabric panels to soften the walls  The view out the balcony and over the gardens is wonderful. And it’s great having the whole group together and able to have a face-to-face conversation when things come up.

It’s a change in work-style though.

“The Office” means getting across-town in traffic, morning and afternoon, I’m still learning the tricks of back roads when the A14 is clogged, and the “PlusBus” train-transit combo from Shepreth to St. John’s still eludes me.  It means dressing for a real office rather than a home office.  It means appointments and meetings.

The balance between meetings and individual work time is still coming into focus.  Scheduling via a shared calendar is an evolving art (I will not use Outlook, though: it’s too reminiscent of Corporate when it dictated my every waking minute).

But, overall, it’s an agreeable change and feels like a big organizational improvement.

Last week, Mitt Romney was asked what he would do as president to close the wage gap between men and women.  He told a story about how, as Governor, he faced a situation where he wasn’t being presented with qualified women candidates for his executive openings.  He demanded, and received, binders full of women and went on to create one of the most balanced teams in the country.  The story  didn’t answer the question, and also started a meme about “Binders of Women” that still reverberates.

Last night, I met the British trade representative from Houston, at a BIA reception where I was speaking.  We both looked for connections to anchor our conversations: his was telling a story about American’s abroad who relocated their businesses to Houston; mine was about a ride-along that I did with the Houston paramedics Both of us told good anecdotes, but neither of us connected.  Our stories were associated with Houston, but disconnected from one another.

I often tell short stories in my blog essays, thoughts and observations organized around an event or idea.  I never go back and change a post,but I sometime regret the way that they turn out.

It most often happens when I experiment with painting a story, as with Route 52.  I wanted to try to evoke the feeling of the countryside, it’s contrasts with Europe an d the ‘otherness’ that familiar scenes turn into after being away for years.  But it wandered, capturing snapshots without tying the underlying ideas together.

Expats and Entrepreneurs have deep pools of stories that they can share.  But selection and timing, as in comedy, are everything.  It leads me to four thoughts to keep in mind when I write or tell stories:

I’ve learned how speaking skills, style and presence, can be improved by watching Obama’s old stump speeches or Jobs’  early product introductions.  Similarly, good examples of skilled storytellers at work can be illuminating, both the structure (reading narrative non-fiction in magazines like the Atlantic or Best Essays compilations) and the flow ( From Our Own Correspondent or This American Life).  Ira Glass has a wonderful series of YouTube videos about How To Tell A Story.

So I’m pausing, just a moment, before launching into an anecdote to be sure I’m telling a story.  From  my observation, Mitt seems to be learning the lesson too, even as Barack forgot it. 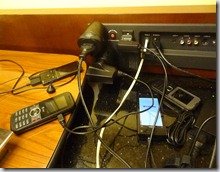 This rat’s nest of wires and gadgets is my on-road kit, recharging:  Three phones, a computer, a camera, an mp3 player, a clock/alarm, sometimes a TomTom or voice recorder, all with universal adapters.   They nestle into a shoulder bag, which also has my diary, my expense book, my notes-book, a Dutch dictionary, Dutch workbook, magazines, a book or two,  hair brush and reading glasses.

Except for the brush and glasses, is it time to consolidate?

The anachronistic folly was emphasized during a recent planning meeting: when it was time for a date check, everyone pulled out phones and tablets.  I whipped out the trusty Cambridge Diary and a pen.  For goodness sake: you’re the tech guy!, hooted my companions.  “ ’not an issue”, I grimaced.  But when I got back to Cambridge I went looking for the 2013 edition and it became one: my 800-year-old institution had finally given up on printing paper diaries.

It’s clearly time to move on, get with the 21st century.

Although I’m not completely trusting of cloud storage and worry about the risk of losing everything if catastrophe befalls a tables, the emerging 7” form factor is appealing, and cheap enough to experiment with.  Most of the printed material has on-line equivalents that can be red off-line, and it shouldn’t be much trick to consolidate audio media.  I’ll likely hold the camera (and reading glasses) separate for now (people do look ridiculous taking photos with a tablet), but otherwise everything should go into one electronic device (and power cord).

Fortunately, this is Tech-tablet-announcement week: Apple early, Microsoft mid, and Google late, all with new products.   The Surface is likely too large for what I want, Apple’s Mini will probably be too expensive.  That leaves Nexus: so if Google comes up with 3G connectivity, I’m ready to take the leap and she the shoulder-bag.

‘Advice to a tech-savvy, tablet-naïve road warrior is welcome!

Follow-on: Nov 1 – There’s now good information coming out from reviewers on all of the options now that product launches are complete.