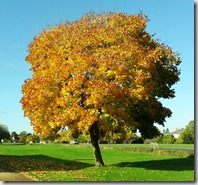 There’s a beautiful tree along the green in Barrington.  It’s green in summer, bare in winter, glorious in autumn.   This year, walking out each morning to head for the office, I’d note the changes.  Not always the best weather for a picture, but enough blue-sky days to get a good sense of progress towards winter.

The Euro-US political divide continues to widen.  I’ve commented before that the US has been using Europe as a surrogate illustrating economic policy failures, whether stimulus (Romney) 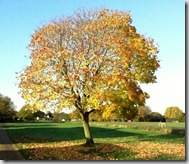 or austerity (Obama).  Roger Ebert noted he’s receiving more of That Comment: You have no idea of what you’re talking about. You love socialism? Move to Europe.  Fox News rattled the bones after the election: Ever-bigger government, greater dependency, higher taxes, ever-more spending and crippling debt, socialized medicine, and dwindling freedom.  It’s a bleak future–one that resembles more the imploding nations of Western Europe than the United States of America.

Now it’s infecting the European side as well (can you blame them?).  A Republican-led US would share few values with Europeans, suggests Simon Kuper, noting Tea Party characterizations of Europeans as crazed, bankrupt, jihad-supporting socialists.  The Atlantic seems to have got a bit wider,” says Daniel Keohane.  It’s become hard to say “our shared western values” without smirking.

Still, I think you have to hope for, believe in a better future and a way out of this business-induced economic quagmire.  It does start with a simple vote.  I have to commend King County elections for doing everything they can to bring voting into reach.  Ballots arrived on time, backed up by solid non-partisan information about the alternatives and 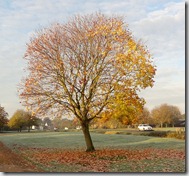 impacts off each issue.  There were multiple ways to return a ballot; ways to track that it was received and counted.   They do a great job.

And I cant complain about the outcome.  It was satisfying to see the decisive vote to retain the President, always gratifying to see the whining on Rush Limbaugh’s pages and Fox News editorials.  In a country of children where the option is Santa Claus or work, what wins?  Good luck hammering away on that 47% folks: it will win you friends at the next election.

Still, Obama has had a mixed record and has proven to be a disappointing spokesman for progressive causes.  The Economist and FT gave him lukewarm endorsement on the basis that he’s the devil we know, measured against a challenger with no firm political principles.  I hope that the second term will see more leadership, more imagination, more heart in reaching out across the country with better solutions, better negotiated, better articulated. 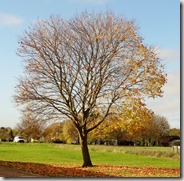 And, with that, back to the +31 for a couple of weeks.  This is going to be a Dutch-language marathon ahead of my toets next week, and then on to the massive Medical trade show in Dusseldorf. I was surprised by a rare instance of the Queen’s Border Patrol doing a passport check on the train from Liege to Maastricht.  Things are tightening up.

But  IND has approved my Dutch visa renewal: the officers actually smiled looking at the letter (a contrast with dark warnings from the UK – Eurostar booth that my British time is almost up).

The leaves may be falling, but things are looking up.