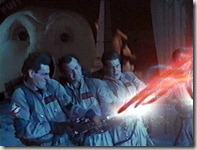 The cardinal rule in the original Ghostbuster movie (left) was never, ever to cross the streams of the proton guns.  Similarly catastrophic events can also come from more prosaic sources: banking and taxes.

Yesterday I launched into my formal renewal of my Tier 1 UK visa. For months my immigration advisors have been telling me that it’s a pro-forma exercise: much like the Dutch, show that you’ve bee doing what you said you would, that you’ve not had run-ins with the law, and that you’ve maintained minimum bank balances and salary slips.

The problem began when we started assembling the documentation.

A year ago I switched from being an employee to being a contractor, but allowed the checks to pass through my UK personal accounts on the way to the Dutch company accounts.  Unfortunately, this transient presence meant that I could be considered UK self-employed, possibly unregistered, perhaps untaxed.   It can apparently be set right, but will take time, money, accountant’s testimony, and endless paperwork.   I have, I all cases, reported my income, kept meticulous records, paid taxes, and followed my accountant’s advice. This wrinkle never came up in any conversations (the concern was more whether I respected the IR-35 line, which assures that UK workers don’t evade taxes by setting up foreign consultancies).

However, it reinforces the Ghostbuster Prime Directive: Don’t cross the streams.  Or, in this case, never ever allow business funds to unintentionally co-mingle with personal accounts. 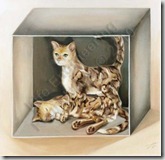 The whole day went similarly: Every opportunity or issue that I looked at went bad.  It feels like a trend: Days  that begin badly seldom improve.

Friends have talked about the phenomenon of one bad thing following another as being a case of bad karma, synchronized biorhythm dips, and alignment of body atoms into configurations that attract poo.

I think the explanation is more quantal.

Schrodinger’s Cat is a famous physics construct where a box holds a cat that could be alive or dead,  depending on the outcome of a probabilistic event.  The act of looking condenses the uncertainty into a fixed (and final) state..

If events remain similarly unresolved until I look at them, and the act of observing is revealing one bad consequence after another, then I suspect it’s only prudent to stop looking.  Maybe there’s a quantal bias that has to clear (luck?); maybe my attitude is influencing the outcome (dread?).

But maybe there’s a point where it’s best to stop killing cats and simply go to bed.

You laugh, but when I got up this morning, Obama had been re-elected.  ‘

Imagine the consequences if I had looked last night?

email
« An interlude
Autumn is rolling in »
Radar Weather