First, congratulations to Jules and her partner on the happy birth of their new baby, Rijntje.  Jules is a friend and fellow expat-blogger at Outside Looking In, and I’m looking forward to the stories she’ll have to share.  My children are now 23 and 25 (Laura had her birthday on Thanksgiving this year) and the baby-years seem long ago but still very close.

It’s a busy day, so just a few short items before heading back out into the rain and wind

Working:  The 5-2 diet. I’m down to my college weight and actually lost weight during the road trip last week.  I have to figure out how to stabilize at that level, but certainly feel better with 15 pounds off my frame.

Not Working:  KPN.  They came, they punted, declaring that the connection at the house works even though they can’t get a signal at that junction.  I’ve put some Dutch friends on the case – two months without phone, TV, Internet and counting. 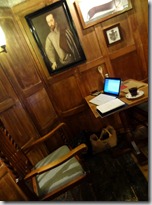 Working:  People at work.  We’re in a tangle at the businesses trying to initiate experiments that clarify the findings of earlier experiments and negotiating partnership and finance deals.  This is where the value of hiring good people really comes through.  I have increasing confidence that they can find the right answers and that that we’ll move the work forward. Our conversations around the issues have been outstanding and, more importantly, I can see the challenges cementing the group for the long term.

Not Working:  Geriatric medical care.  Well into their 80s, still living independently and sharp as when I was growing up, their doctors spotted some health concerns just prior to my arrival in Denver last week.  They sent my father for an angio and found a blockage that they couldn’t fix.  Along the way, they dislodged debris that caused a minor stroke, then sent him home attributing the symptoms to anesthetic.  Fortunately he recovered over the next few days; now my mother goes in for a procedure next week and they’re prescribed a blood thinner that causes irreversible bleeding for my father (Pradaxa).  We’re losing faith.  I think when people get past 75, they should be left alone to lead their lives without preventative drugs and procedures.

Finally, I recommend a column  by Harry Eyres in the FT about conversation: specifically Where should one go for interesting and intense exchanges?  His thesis is that mobile phones and social media are inadequate replacements for face-to-face conversations.  He particularly relishes intense and spontaneous café sessions aided by rough furniture, good coffee, and deep subjects.

I agree, and find my setting at college Formal Halls.  Friday evening I sat across from a variety of social science graduate students.  Conversation ranged over whether digitizing analog films changed the  viewer’s experience (I say no: aren’t films already digitized as frames?), whether expatriation is a recent phenomenon (apparently nobody from the periphery of Britain’s Empire moved to the UK until the 60’s), and whether a Chinese scholar would feel more comfortable settling in the UK, Switzerland or Japan (Japan).

The three hours flew by as we gestured and parried over long wooden tables and deep ruby port.  Something bonding and generative is, indeed, lost if we abandon the buzz and flow of casual conversation.

email
« Through the mazes
Upgrading to Windows 8 »
Radar Weather