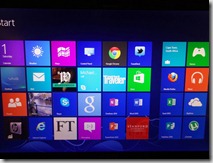 I’ve always been a Microsoft user, starting with DOS and upgrading with each iteration over the <sigh> decades.  I have a TechNet subscription so the latest version has been waiting for me for since October, and I settled in with my Viao Z last weekend to turn the latest trick.

It hasn’t (yet) been a happy transition, and I’m only a week into experimenting with the system.  A few first impressions:

The upgrade process is probably most difficult of any Windows version.  The initial compatibility scan turned up a half dozen potential problems.  Some required driver upgrades which required me to cancel the install and visit the manufacturer’s websites to find Win8 versions.  My antivirus, Microsoft Security Essentials, had to be manually removed, leaving my computer frighteningly vulnerable.  My trackpad had no upgrade so I had to go buy a substitute mouse.

A day later, the installer finally gave me a green light.  The OS took an hour and a couple of reboots to install, and there were an additional two cycles through Windows Update.

In the end, everything survived, every thing worked.

The core elements of the UI are still immature. The biggest change in Windows 8 is the phone-like Metro interface, dynamic tiles that highlight the current status of news/weather/calendar and personal mail/social networks/photos.  Additional tiles are available through the App Store, and I installed Skype, the Financial Times, and a Dutch Dictionary to get started.  Finally, I installed Office 2012 and a set of programming tools.

Be prepared for a lengthy configuration and settling-in process!  Although Win 8 is tightly integrated with my Windows Live login ID, none of the established links were imported.  So, for example, I had to connect the People tile to Facebook, Twitter and others. The computer had to be registered as a “Trusted Computer” by email to complete the import, and it took a day for content to start appearing on-screen. My contacts were imported, but yielded a mish-mash of names and pictures that was totally worthless.

I’ve had similar issues with most of the tiles: they are simplistic, inconsistent, badly organized, and need a great deal of tending to reach minimal usefulness.  Even worse, they contain ads, even the native apps!

There is too much integration of internet applications with Microsoft.  The the computer’s password was set to match the online account; the Skype tile linked my phone account similarly.  I suspect a deeper integration of usernames and passwords is taking place as I’m auto-logged into my sites, even as I’m being asked for my Microsoft password “for my own protection” more and more often.

Applications, including Office, are harder to access. The familiar desktop lies under the tiles, and is unchanged.  Many functional tiles simply drop to the desktop to run, including all of the Office apps, so the tiles actually get in the way, adding a step to browsing, creating a document, or editing photos.  The Start button is missing: access to essential links like the Control Panel or a Matlab Application can only be done by creating a tile for it.

In general, there is no difference in the performance or behavior of applications once you get to them, so the added step of finding and launching a tile is just an irritant.

So, a week in, I’m unhappy overall with Windows 8.   I realize that I need to change the way I think about driving the computer, but I honestly don’t see any advantage to the tiles.  They don’t work well enough to be a good dashboard, and they form an extra layer between me and the tasks I want to do.  It’s just awkward and time consuming: optimizing the configuration will literally take a month.  In fairness, I’m not using a touchscreen, but I don’t think that having one would change my feelings.

Philosophically, I know that computers are migrating towards being devices for consuming content rather than creating  it  A mature and active library of lightweight tiles, integrated with phone and tablet deices and sync’d through the cloud, may be a better way  to access resources and connect with friends.  But it’s a step away from helping me to write documents, analyze data, and do research.

Sometimes, confronted with increasingly simplified and indirect GUI’s, I miss the elegance, simplicity, and flexibility of a command line.  Sometimes, I miss Unix.