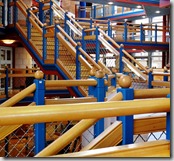 December is starting ugly, too many things to do, too little time to catch up fully.  It turns into a twisty maze of tasks, interconnected on different levels, that remind me of the interiors at the Judge Business School (left).

The outcomes matter more than the process, for many of 2013’s decisions hang on the answers revealed each day of the next few weeks.  In that way, life is coming to resemble an Advent Calendar.  Each day, on only on that day, a door is opened and an answer I revealed.  I may win a prize, I may get a lump of coal, but it’ become a matter of planning, waiting, responding.

The week began with Board Meeting and our company Christmas event.  We had a good office-warming for the new digs at St. John’s and a nice dinner for the working team both in-house and from the Judge.  Everyone is holding their

breath to see what happens with the next round of laboratory experiments: with success we’re on to our clinical trial.  An issue sets back the schedule a few months and impacts fundraising.  We saved a bottle for when that door gets opened mid-month.

My visa hearing is coming up fast as well, bringing forward my Tier One for another year and indicating whether I may be granted Indefinite Leave in order to continue running the business.  5 years of success and good behavior are generally required across Europe, including the Netherlands and UK, but with anti-immigrant feelings running high,renewal is no longer a benign.  That door opens on the 19th.

The cold weather finally gave way to snow this morning, a light dusting across the fields and roads.  I’m curled into my home office, catching up after a lot of travel and meetings, so it’s a good excuse not to slide into the office.  The floor is covered with a white dusting of paper, blowing into drifts against walls and furniture.

And the computer is winking with an invitation from Andre Rieu to enter his Advent Calendar for 2012.  CD, Tickets, recipes and concert videos lurk behind the links, set in his Maastricht home.

I’m fascinated by the lush look and sounds of it all.  His mansion lies just outside of town along a walking trail and I’ve seen the exterior many times.  I can’t imagine anyone really decorating to this level, but I’ll probably walk by to see.  I’ll arrive back in the US around the 20th, so it’s going to be a scramble to put up Christmas together in the days remaining.

That door opens on the 24th.