What is the role  of a leader in government: is it different than the role of  business leader?

I’ve thought about this a lot over the past months, thinking about this picture of Angela Merkel and Nicholas Sarkozy last summer during the euro negotiations.  On one viewing, they look like any two business executives leaving  meeting for a nice dinner together. Yet they represent Germany and France:  Countries and Peoples, History and Culture. 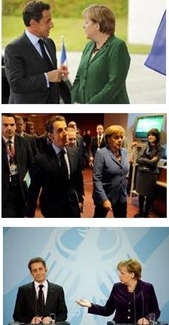 As executive leaders, they set policies and administrate agendas.  They advance their own national interests, provide for the welfare of their citizens, and negotiate to their advantage with peers and supplicants.

But they are also embodiments of their countries on the global stage.  They represent their culture and industry, defend their language and economy, speak for their citizens and commit their resources and support.  Kings and Popes take on these tasks where parliament and monarchy share power, but these leaders take on both roles.

As do business leaders.

How many activities are familiar in this montage?

We carry out the same scope of executive functions, on a smaller scale, and we answer to quasi-legislative and judicial authority through governments, shareholders, trade groups and Boards.  We share nice dinners with our peers.

But, particularly in our dual role as Founders, we represent the business.  Our companies exist because we believe in the product and market, because we could recruit people and money to the cause, and because we could organize and execute on the project.  So we become very much the ceremonial and practical embodiment of the company. 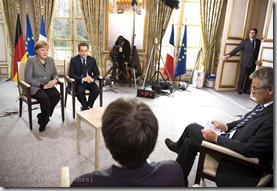 It’s a role and responsibility that I don’t think about as much as national leaders like Sarkozy, even though it’s an important part of my job.

I don’t often think of myself as the embodiment of my business, as  Merkel thinks of herself as German, but I’d be a better actor and agent if I did.

I’ve attended curses where we learn from politicians how to speak, relate, negotiate, and motivate.  At a deeper level, I’m watching how they govern, in roles that both administer and represent their organizations and institutions.