I arrived back in Seattle yesterday morning after a long ride over from Amsterdam. 115,000 miles for 2012, a bit scary in aggregate cost, time, and hassle.  I slept for 12 hours on arrival, only partly due to jet lag: ‘been burning the candle at both ends into the year-end.

Some good news: KPN finally arrived.  To recap: My cable / internet has been down since October and the utility has been claiming that bad building wiring is the cause: take it up with the landlord.  I have run power to the downstairs utility closet, placed the mode in direct connection with the street connection at the junction box, and nothing works. 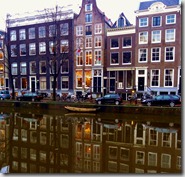 For a week, I’ve hammered KPN on Customer Care and Twitter.

The tech took a look, made a measurement, and said that he couldn’t understand why 5 earlier techs in the neighborhood had said there was no problem.  He needed a second person and a few hours, but everything is now connected and running.

Now to get the 2 months billing reversed.

I had a year-end health screening yesterday just to keep on top of things (my European friend say this is *never* done on the Continent).  It was conducted in a nursing home: a sobering reminder that I’m no longer a generation removed from its residents.

All of the blood chemistry, circulatory, bones, and blood pressures were good (although they couldn’t find my Abdominal Artery on the ultrasound).  Given life’s stresses and lack of time to exercise recently,

I need to work on life balance, social connection, and relaxation in the new year.  There have been too many late flights and tiny hotel rooms recently.

Someone suggested including both “Game Changers” and “Mood Changers” in my future goals.  It’s not enough to tumble over the goal line with a business exit or a language score: along the way, I should  also include symbolic moments that recognize position and reward progress.

It’s an interesting idea: Christmas break should be a good time to wind things down and get perspective again.

The Amazing Race 21 came to an end last week – they went through Amsterdam and it was fun to see them searching past familiar spots.  There was a tied Haring Eating challenge, a choice of “arranging actors to replicate the Night Watch” or “Organ grinding to collect 30 euros”, followed by pole vaulting a dike.

They got the traditional Dutch Hallo and Tot Ziens at the pit stop, which they needed to remember for the final challenge in New York.  As it turns out, the couple in the lead could not match Tot ziens to the Dutch flag and lost.

Good fun: I’d love to do this Race some day – my daughter and I have discussed it.

‘Now to catch up with Masterchef Pro and Episodes.