I work in the UK under a Tier 1 General visa, granted in January, 2010.  It’s a points-based, 3-year program that lead to full immigration into Britain or granting of Indefinite Leave to Remain.  The rules for getting a visa have tightened up considerably since I got mine, as the Conservative government tries to restrict the flow of workers into the country, while promoting integration and lessening dependence among those who do come.

The Tier 1 allows two one-year renewals, and my advisors told me that it was similar to the Dutch system: stay on good behavior, keep working, maintain a minimum bank balance, pay your taxes.  When the time comes, fill out the forms, go to the Border Agency offices, and pay your fee (1800 gbp for the renewal).  No worries.

But, as I’ve learned through long experience when it comes to these matters, Do Worry.

As presented to me, renewal is looking more and more like applying for the first application, with strict rules on points-based proof, original documentation, and prolonged loss of passport during processing.  I’m now remembering, three years ago, that I made application through the Chicago embassy to get 24-hour turnaround.

I need 95 point to get the visa renewed, based on these qualities:

It’s a funny system.  In a land where youth unemployment is a big issue, extra points are given for expats in their 20s, no points over 34.  Qualifications are degree-based; English Competency may require an exam (shuddering flashback to the Dutch tests I recently took).  The others are economic, if you make over 30K gbp/year, then you’re good.

It seems like it addresses the questions of whether people can integrate and take care of their own needs.  An obvious hole is the level of assets being built and debt being carried,  how has life progressed over the three years.

But, worse, the economic side is blank.  I have started a business, hired local workers, imported cash, exported product, mentored and taught others doing the same.  Zero points, but that is exactly what they want to have people doing to build economic growth, preferable to austerity.

Whatever, the country belongs to the government and they re entitled to set their own rules  I can get to 75 pretty easily, but the remainder requires me to prove that I make over 30,000 gbp per year.  It shouldn’t be difficult: Payroll records and bank statements, an annual report from my company.

But there are two complications.

First: Dutch-based company.   I work as a UK-based expat for Stone Bridge Biomedical BV.  With operations in three countries, Stone Bridge pays my salary and expenses from several locations.  Consolidating them to show one payroll check, one corresponding bank statement that exactly matches the payroll check, is impossible. 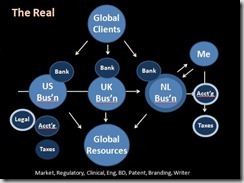 Second: Taxes.  I work for my Dutch company, so I pay Dutch business, payroll, and personal taxes.  I report the business and personal income to the UK and the US, who all interpret it in different ways.  All recognize and credit the Dutch taxes paid.  But the British may raise IR-35 questions (Are you truly a Dutch expat or actually a UK worker) and questions about the local bank account (Is it a business account or a personal account).

It all gets very, very complicated, expensive, and time consuming.  My case worker is already rolling his eyes and asking for more money to cover the work of prosecuting my application.

I understand the need for secure borders, limited inflows of people, and domestic employment growth.  But it is becoming, everywhere, progressively harder to follow a process that simply allows me to keep living locally and building my startups.