The part of ourselves that we regard as most exceptional is also our basis for feeling most aggrieved.

We are distinct persons, each with a unique identity.  We define identity and through those parts which are distinct from others, including both intrinsic qualities like gender, age, ethnic and geographic origin, and acquired qualities like skills, affiliations, and appearance.  We value ourselves for those qualities which we think are exceptional: we suffer when those same qualities aren’t respected by others.  Several times this week, I’ve seen people launch into rambling defense of how their group isn’t treated fairly by institutions or society: I think the basis is rooted in identity.

I can always tell people who are seriously studying a language because they have a text and a dictionary close at hand.  I’m currently carrying my Prisma and a book of essays; I smiled at finding a kindred spirit doing the same on the Tube today. 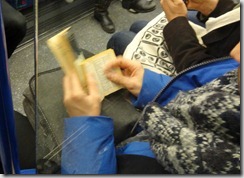 In mixed groups comprised of people from both native and host countries, expats will feel greater affinity for their hosts.

I attended a business meeting this week with both American and Dutch participants.  Opinions were freely exchanged on the tradeoffs of doing business with the Chinese,.  I felt both less concerned about the issue and more uncomfortable with the dogmatic US position on the topic.

On one level, I know that conservative perceptions of China arise from provincialism,differing economic and political philosophies, and accusations of unfair trade practices.  There’s probably reaction to Obama’s “Asia Pivot” thrown in as well.  But it made me uncomfortable, I thought about how it looked to our hosts (who tweaked him whenever they had the chance by pointing out how his computer and clothes likely came from China).

On a deeper level, I was taking sides with host participants over my native participants, just the opposite of what might be expected.  On reflection, I suspect that as a result of trying hard to understand and integrate into host society, I develop an affinity for their (rather than a simple tolerance) for their point of view in mixed settings.

There is an alternative view that holds that expatriates are escaping their identity by leaving their native country, and would  naturally feel less affinity with their visiting countrymen as a result.

I visited the GSK Bioscience Catalyst research facility this week, and took in all the slogans lining the road from the main gate to the conference center.  I understand the concepts, pioneered by Henry Chesbrough, that if you put a critical mass of diverse talents around a problem, creative solutions emerge from their interactions.  But does it work?

As a research director, I’ve come to believe in the power of grand challenges and insightful individuals.

I found it was most effective to pose a problem without specifying a means for solving it.  Resources (data and tools) and motivation (competitive (a performance “shoot-out”), passionate, or monetary) generally kick-started individuals.  Someone would break through with a really novel and effective idea, which would catalyze others.  Now the collaborative group begins to really achieve something from shared excitement.

But simple co-location, interaction, and brainstorming is not enough.  I wonder how the slogans are working out at GSK?

email
« The hoarfrost arrives
On the road again »
Radar Weather