I took my new visa out for a spin this week: despite a lot of bad weather and a few bobbles along the way, it as nice to be traveling again.  The route was a broad triangle across the UK and Germany; snow was threatening on Sunday evening, but I set up a combination of planes and trains, grabbed the Nexus and the pink cards, and headed out.

…but not before attending  The 39 Steps, a very British comedy, before leaving: it is delightful in both pantomime and dialog.  Recommended.)

There were two inches of fresh snow on the ground Monday morning, but the rails services had cleaned

up overnight and the trains were on time.  I arrived at the University after two connections only ten minutes off schedule – really outstanding performance in the conditions.  The meetings went well: although we didn’t fully close the deal that we’d hoped, we stayed well in the running. I’m hoping a big player doesn’t simply throw money over our heads to capture it. 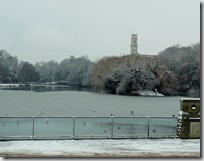 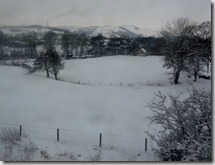 Then on to Manchester and a late EasyJet to Munich.  The meetings turned out to be off in a village amidst the quiet, countryside an hour out of town.  Picturesque in winter, the snow neatly piled along the roads and at the foot of the MayPoles.

The room was austere in the Bavarian-lodge style, but comfortable (I’m reminded of Arthur Frommer saying that Americans can’t be relied on to judge European hotels.  Rustic to Germans too often means Austere to Americans.

The business was a typical German Mittelstand, a family business, 30 years old, 35 employees, doing very high-quality work in modest volumes.  They had a sophisticated quality control and documentation system that would be a model for any medical device company; lunch included mains and dessert made by the employees.  A really appealing mix: we’ll do this deal.

There was time for a quick spin through the slush in Munich in fruitless search for gluhwein, then back to Stansted for a quick night.  On the way through Border Security, I grabbed the wrong ‘pink visa card.  “Netherlands?” the agent frowned.  Munich, actually.  “The card says Netherlands.”  He waved my Dutch residence card, a close match for the intended UK visa still in my wallet.

UKTI, the British export assistance agency, organized a seminar on doing business in China the next morning: nobody should start meetings at 9 am in snow when people have to arrive by train.  I caught the 6 am  and barely made it.  The seminar was really good: first-person accounts of setting up business links as a medical startup, the importance of distributors and relationships, the details of moving product and money.

On to London, a follow-up meeting to determine how to align with the British requirements for Indefinite Leave to Remain in two years.  It’s too difficult to register a Dutch company with Companies House to do business in the UK, so plan on transferring payments to the Netherlands and back.  Keep good council tax records to prove residency.  Collate receipts with every business trip out of the UK to prove why you left.  Start building visible ties to the community.

It’ enough to make me wonder if I;m really achieving any competence or success in dealing with the visa process in the Netherlands / UK or if I’m just enduring / thrashing /spending to stumble towards a solution.

And back to a flat tire: a massive phillips screw that I picked up somewhere along the road.  AA came out to change the wheel, courtesy of the Dutch lease.  ‘Think someone was sending you a message? joked the repairman.  At least, I hope it was a joke: visions of someone pounding screws into my tires with a rock, cursing my alleged Duchness, are starting to haunt me.

I took the punctured tire to the Kwik-Fix: “Can you patch this?”  No, but we can plug it.  Cool, whatever.  14 pounds and two hours lost, but I’m back on the road.