Travel at the holidays Often feels as exiting as the NS train fire on New Year’s Eve.  (Caused by a short circuit,  this one has disrupted service north of Utrecht).

There are always cheap airfare deals available around New Years, so, more often than not, I end up flying back to Europe while everyone else is drinking or recovering.  This year, I visited my parents in Boulder, spending New Year’s Eve at dinner and a party where we successively rang in 2013 in Maastricht, Cambridge, and New York.  Champagne flowed from lunch until late evening – lots of fun.

Tuesday morning, though, I was back on the road and headed to Maastricht.

I’ve been driving a rental Fiat 500 over the holidays: a retro little thing with metal dashboard and Lilliputian seats that tootles nicely into small parking crevices.   My advice to Europeans is always to rent a big car in the US so that you can cold your

own among trucks and SUVs, but this was pretty nimble (if not particularly fuel efficient).  The airports were crowded with families returning from holidays, and both the Atlanta and Amsterdam flights were crowded.  Snow in Denver, heavy rain in

Atlanta, cased flight delays and my luggage missed the transfer, but the trip was otherwise uneventful.

There weren’t many new movies, so I did some reading and caught up with some interviews embedded in the television feeds.  Brad Pitt doesn’t seem to think too deeply about his craft; George Clooney certainly does.  I’ve felt like he’s been a shadow presence over my expat life, rushing through airports as Ryan Bingham in Up in the Air, smiling down from Nespresso posters. troubled in Michael Clayton.

Como to bring him closer to his happy place) and his thoughts on the importance of understand what job you’ve been hired to do.  So often I think of a job in my own terms, revenue, career, personal development, that it’s easy to lose the simpler

expectations of the people hiring me.

He laughed that if selling coffee to Europeans allows him to live well, work on projects for scale, and spend time on socially worthwhile causes, then he was fine with the trade-off.  He’s part of an interesting brand strategy with Nespresso: basically its no different from Senseo but positions itself better through his presence, the coffee bars in Bijenkorf, the product framed behind glass like jewelry.  It probably buys them a price premium and customer loyalty (see Wharton and the New York Times).

I arrived in Amsterdam early in the morning and heade into town to pick up the revised and final documents for my UK visa renewal.  Ironically, the Brits re refusing to recognize the legitimacy of my Dutch accountant, requiring me to spend an extra 350 gbp to have them transcribed and stamped by a London auditor ( 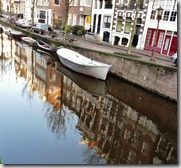 “Is this money laundering?” was his first question to me).  The morning was quiet and misty over the canals, ankle-deep in New Year’s debris.  25 hours on the road: I stopped at a coffee shop and asked for a latte, wearily, and set up my computer on an empty table to look for wifi and update email. 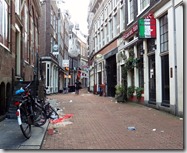 The coffee arrived, I passed 5 euros to the waitress without really looking.  She shifted, a flash of leg, bright red sequined hotpants, startling at 10 am.  I looked around.  Teasers: Beer and Babes.  She flashed a broad smile, I told her to keep the change.  I sighed and went back to work, definitely back in the Netherlands.