It was dark and raining when I lined up outside the UK Border Agency office in Croydon this morning.  Asylum left; Visa’s right, the officer directed.  At 7:30 precisely, wholly uncharacteristic of a government agency, we shuffled through the front door.

This was the end of a three-month prep for renewing my Tier I UK residence / work permit.  I’ve been on it for three years; it was required to operate my UK startup and to accept funds, and had worked smoothly throughout even though I base in the Netherlands.

But the renewal is much more difficult than the annual Dutch ‘Send a photo,  check, and a bank statement’ process.

In the UK, points-based scoring requires re-validation: Five categories of evidence and original documentation in support of each one.  I needed my original diploma, signed and stamped bank statements, and three trips to Amsterdam to secure statements from my accountants.   The pre-audit ruled out the Dutch as being legitimate sources of financial data, so the job was re-done by UK auditors.

This morning, I had my pile of documents and a handler alongside to see if I could complete the process.  The appointment and application were checked; we went through security and they confiscated a corkscrew from my suitcase.  We went through an application check, a background check, and they took fingerprint and facial biometrics.  I paid the fee for a 2-year renewal: 1800 gbp (on the card, at least I get airline miles).  The packet went in to an examiner and I settled in to wait.

The process took four hours.  There were three call-backs to provide additional evidence (which I fortunately had) and one bump for a supervisor check (customary for self-employed applicants).  At one point, my handler was handed a red piece of paper and he grabbed his cell phone and ran out of the room.  I thought it had sunk, but they wanted the professional registration number of the UK  auditor.

Finally, I was given a letter that my application had been approved and was advised 1) not to leave the country for the next week until my biometrics card arrived, 2) that I have no recourse to public funds, and 3) that I could not train to be a doctor nor seek employment as a professional sportsperson.

At tis level, both applicants and auditors are trying to do the right thing, and both are ill-served by the system (and I think that the US has equal difficulties). 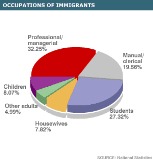 Professionals seeking a work permit have skills and ambitions to create businesses and products that grow jobs and exports.  Reviewers are conscientious in assuring that applicants will be able to integrate and perform.  But the process is so expensive and intimidating, very difficult to get right from either side.

Does it, in the end, serve the positive goals of society to make the process so challenging for those who want to come and contribute?