There’s no wi-fi or power outlets in the waiting room at the UKBA, so when the batteries died on my laptop and tablet, I was left looking out the thick protective windows at the empty plaza in front of the building.  It was probably conceived as a public space where people could gather, talk, and eat on sunny days.  Now it’s walled off from the street by concrete barriers, from the sidewalks by high fences.

It’s not much different inside.  The clerks are protected from the clients by reinforced windows; the furniture is bolted to the floor.  Yet this is, to paraphrase the Gettysburg Address, a government of the people, by the people, for the people.

There’s no doubt that people are frustrated with government: they doubt their leadership’s ability to make their lives better, to provide civil and social infrastructure, or to manage laws and resources for the common good.  Promises to improve services and hold down taxes never materialize.   Governments everywhere, whether Western-democratic or Eastern-authoritarian,  are viewed as venal, corrupt, wasteful, and under control of the moneyed and the powerful. 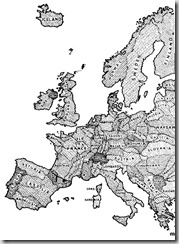 Yet governments are, well, sovereign.  They literally own the country, they make and enforce the laws, set rules for the economy and media, maintain the civil and defense forces.  How did things go so wrong that they must surround official buildings with bunkers?

I was talking with one of the facilitators about the incongruity of seeing national governments on the defensive in their own countries. We agreed that they are caught in the middle, enforcing transnational policies on immigration, austerity, trade, and the environment that are at odds with their national self-interest.  The people electing them and the media holding them to account are increasingly critical.  He predicts that they will soon respond to populist pressure from within, turning away from global institutions and idealism.

There’s  rich academic literature on the topic,  the problem and the risks are widely perceived but there is little agreement on remedies. Many hold that nations have already transferred so much power that they can’t regain national sovereignty. The solution, in many papers, is to complete the globalization process more quickly so that the benefits arrive sooner.

I’m suspecting that the opposite may happen.  There may be a weakening of the EU, withdrawal from the Euro, default on financial debt, or increased border and trade protections. But something has to change: a sovereign that holds power won’t remain in a defensive crouch when they have the ability to re-assert control.