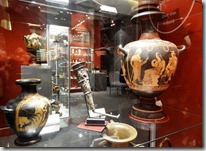 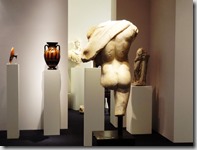 This is my usual experience with the Greeks: urns and statues in museums.  I can tell the difference between earlier “black-figure” urns and later “red-figure” urns, ruminate on the virtues of three-phase firing techniques, can occasionally distinguish a Skyphos from a Kanthros.

It’s all a bit abstract and technical, even philosophical  (Platonic idealisms).

I’ve never been to Greece: it’s on my wish-list, but always too expensive, too far, too complex in planning.  The ancient Greeks, though traveled widely, and dropped anchor in the Valley of the Temples, outside of present-day Agrigento. 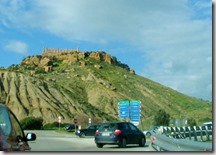 Like Pompeii, it’s a site that evokes real life, massive stone buildings and blocks of carvings, and the setting of the time, amidst flowering almonds overlooking the sea.

The monuments are first visible high on ridges above the coast highway; a winding side road brings you up to the entrance, parking area, souvenir stands, and ticket booth.  Access is no fun: fees that seem arbitrary, multiple ticket checks within a yard of one another, poor signage overall.  But once inside, I just got lost in the compositions of stone Doric columns, flowering trees, and sunset light. 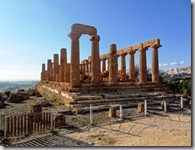 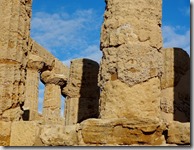 The temples were built in the 5th century BC, and were subsequently destroyed several times before being restored to their present form by a British patron, Sir Alexander Hardcastle, in the 1930’s.   There are recent, curious, inactive) water sculptures scattered between the temples, and excavated storerooms  beneath the hill. 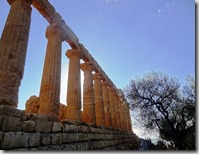 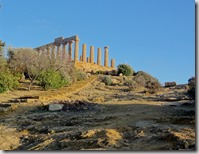 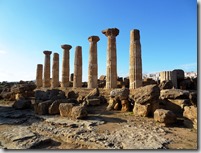 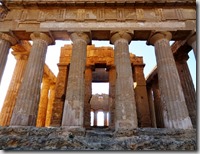 But the temples themselves, glowing tan and orange, the wind sighing through the columns, the distant glimpse of interior alters, really stand alone and above all other parts.  It’s wonderful 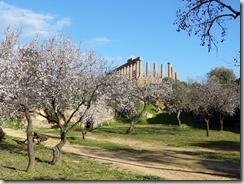 to think about and photograph from almost any angle, it’s easy to see why they chose the spot and how it evokes feelings of connection and transcendence away from the bustle of the ports and market towns.