My first airplane trip was on a family vacation to St. Augustine, Florida, probably in 1960 or so. We flew down on a Carvaelle jet, two engine pods at the back rather than under the wings, a very cool step up from the prop planes of the time.  We stayed right on the beach in a two-story hotel embracing a freshwater swimming pool: I remember a lot of pink and coral colors.

Treasure Island beaches, outside of Tampa, haven’t changed much since those days.

The Thunderbird Resort is a funky throwback, 50-ish room deor, a smell of warm molds and cold air conditioning, a kitchenette with hotplate burners and a stainless steel sink.  The two story hotel wraps around a deep blue pool, open at the ends to the ocean.  Miami-Vice pastel colors dominate.  Patrons are a blend of young families and older retirees. (‘Funny that I think of them as ‘older’ now, rather than just ‘old’.)

But it all works in a comfortable / nostalgic sort of way.

Beyond the resort, Treasure Island is lined with low-rise hotels and beach houses on the ocean side of highway A1A, local restaurants and beach shops on the leeward side of the street.  The whole thing is lined with palm trees, ornamented with gardens, and very much on a human scale. It invites walking, exploring, discovering. 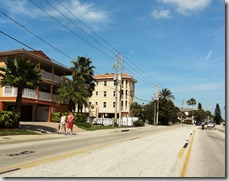 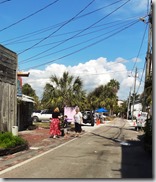 South, towards Clearwater (Spring Home Of The Phillies), contemporary high-rises crowd the shore, a high wall blocking off the ocean and the sunshine.  Gates and guards are the norm to protect the residents from visitors.  Across A1A, strip malls line the road with chain restaurants and national housewares stores.  Nobody walks the streets: there’s only the comfortably familiar and safe.

Artificial intelligence researchers  reduce product selection and purchasing transactions to template scripts that we execute unconsciously from years of practice.  Years of expatriate life have replaced my New World scripts with Old World ones, and this trip I felt wholly out of sync.

The McDonalds breakfast menu was a maze: McMuffin, McBiscuit, McGriddle.  In trying to ask about the differences, I accidently ordered all three.  Two of them were horrible.

I bought a bottle of wine in Target, the clerk asked to see my driver’s license.  I played it straight an handed over the US version.  She inspected the birthdate, then scanned the 2D bar code on the back. All of my personal information into their databases.  “What if I didn’t let you scan the code?”  Then you wouldn’t be allowed to buy alcohol.  ‘Frightening both ways.

So it went: Ruby’s restaurant, a bank deposit, a booking change with Delta.  Each had new steps, unfamiliar checks, a different script.

Some things change in a few years; other’s don’t change for decades.  Americans still fly to Florida in jets.

And they still drive on the ‘wrong’ side of the road…