Sometimes the smaller galleries have the more interesting exhibitions.   Last mouth, the Wellcome Museum had a thoughtful project exploring how societies confront death through their artworks art.  And this month, I recommend Landmark: The Fields of Photography at Somerset House, London.

The curators have arranged the works by 70 leading photographers into a half-dozen theme areas, most dealing with the environment and man’s impact on it.  It fills the East and South wings with big, lush images that take at least an hour to really absorb.

I was draw in by the destructive landscapes of Edward Burtynsky, left, but quickly discovered a number of new favorites. 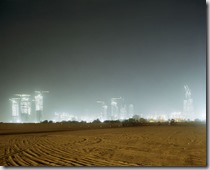 Peter Bialobrzski’s pictures focused on China and the way that urban construction is overwhelming rural settings. The contrasts in exposure and color were really striking. 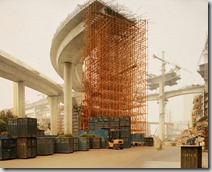 Nadav Kander’s photographs were similarly revealing of the overwhelming gap between civil projects and the people who live among them.

Aside: A good book for getting insight into the uneasy coexistence between ecology and development in China, putting narrative behind these pictures, is the Guardian’s Jonathan Watts’ When a Billion Chinese Jump.  I’m about half way through – it reinforces my concerns after having visited. 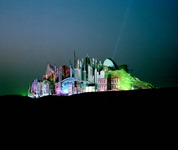 The exhibit runs through the end of April.