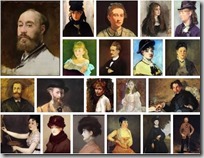 Édouard Manet was the premier portrait artist of the late 1800’s: he painted across the transition from realism to impressionism, through a world being revolutionized by the introduction of photography and the introduction of tube paints.  The RA is reviewing his work in Manet: Portraying Life, on view through the middle of April.

The show is expensive, 15 gbp to enter and the queues are slowed as they purposefully try to limit flow through the galleries.  But, once inside, it’s a very good survey of Manet’s style and the range of his works.

He strikes me as conventional, technically accomplished but self-consciously perfecting rules for composition.  His use of light and detail are designed to draw the eye around he painting. 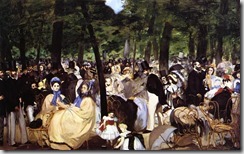 Squint at Music in the Tuileries, and the bright whites circle from the faces in the lower center around counter-clockwise to the men in shadows.  The vertical lines of the trees are repeated in the 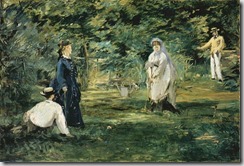 stovepipe hats, one forest echoing another.  In  The Croquet Game, the most detailed parts of the picture follow the diagonal line across the canvas, fading to blurred foliage off-axis.

The same happens with his portraits. The  eyes and brow, the banks and locks that frame the upper face, are very detailed: the gaze is very alive.  The mouth is detailed as well, but the nose is barely shadowed in, the hands are often indistinct (illustrated by his portrait of Suzanne, his Dutch wife, in profile). 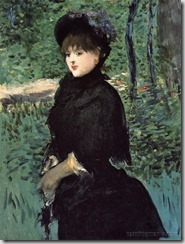 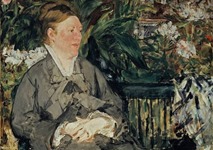 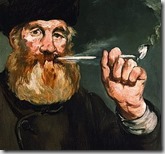 The unfinished limbs and backgrounds,much criticized at the time, are what we now see as Impressionistic.  The question, for me, is whether Manet saw it, or whether he was just bored with hands and forests.

I also think he was  a very aspirational painter.  Thee is little evidence of the poor or the everyday: his subjects are merchants in formal settings.  His paintings reflect well on them; their patronage reflects well on Manet.

Not far away, the Courtauld Gallery is showing Becoming Picasso: 1901.  A fraction of the size of the Manet exhibit with

about 25 paintings on show until late May and costing only 6 gbp, I think it tells a better story.  The first room shows Picasso exploring portraiture (in

The Dwarf Dancer and Portrait of Bibi) much as Manet had 25 years earlier.  Strong contrasts, detail in the eyes and mouths., a strong gaze, and the rest of the picture left indistinct.

But the next room, filled with paintings created only months later, abruptly coalesce into the novel lines and blue tints that are recognizably Picasso.  I was particularly fascinated by The Blue Room and The Absinthe Drinker, as evocative as anything by Manet. 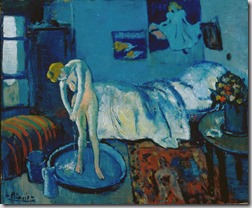 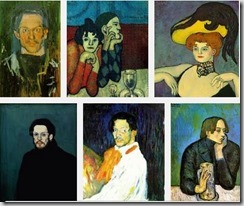 And his portraits thereafter blossom into the familiar style that became the foundation of modern art.

The juxtaposition of the two shows gave a lot of insight into the process of capturing identity through portraiture, and how both the painter’s technique and the viewer’s eye changed in half a century to what we create and experience today.