The European Fine Art Fair (TEFAF) has returned to Maastricht; it’s always a fun (and expensive) outing to get a glimpse of the works hidden in private collections.  Many are works by major artists that surface briefly to change hands (Dufy, Picasso, Matisse, and Chagall are always well-represented).

The show is huge, filling the MECC and requiring at least half a day to walk though.  It attracts a international group of buyers, mostly very well dressed older men accompanied by stylish younger women.  Ponytails and jackets-over-jeans are the

affectation of choice for the trendiest.

Security was much tighter this year, I was searched on the way out to see if I’d secreted a souvenir in my shoulder bag. I expected the “no-pictures” rule to be more strongly enforced as well, but it’s still widely flaunted.  So I enjoy taking time to look at the works, compose some photographs, and study the prices, (mostly well into five or six figures).

The modern works were less daring this year: fewer sculptures and collages, less provocative works overall.  Several good photo-realist paintings and sculptures were scattered about, more figurative/naked figures than I remember from past shows.  Still, it was nice to find a wall of Munch and the occasional Wolf Kahn pastel among the overpriced line drawings. 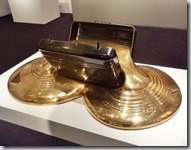 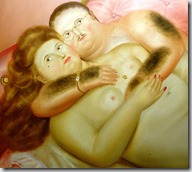 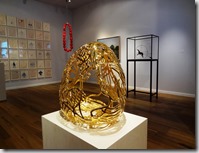 Classical Dutch works, black with yellow-orange highlights, filled one section: they are starting to grow on me.  The detail, the way people are always dwarfed by buildings, and the everyday scenes from centuries ago, were worth lingering over, as were some of the porcelain figurines. 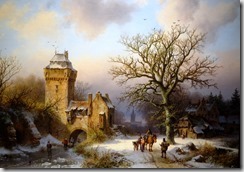 The special show highlighted drawings on paper: lots of wonderful sketches and studies including 25 works by van Gogh that are rarely displayed.  The portrait collection was interesting after seeing the Manet show; there was a real deficit of watercolors throughout, though. 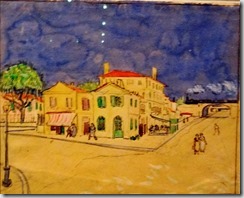 I always love the brass and  mechanical instruments and clocks: it makes me wonder what would constitute a valid collection.   Things of a type, of a time, of a sequence?  Or do really good collectors juxtapose objects that complement one another, or highlight a special space?  Or is it just getting something, everything, before someone else does?