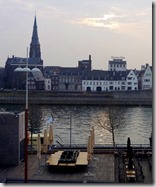 Hi, Dave, You wouldn’t happen to be sat in a blue Ford waiting for the boat in Dunkirk?  Ken

We hadn’t seen one another in eight years, and the only reason I was on that ferry was because I missed the 2pm by 2 minutes (mis-underestimated the queues at Auchen and the ferry terminal).  We had a really good talk on the crossing, catching up with people we’d both known and the way or lives have changed since we worked together.

It’s both comfortable and jarring when the past jumps up like this.  I’ve got lots of good memories of Physio and the work we all did together.  It’s nice to see how little people change and to be able to pick up a conversation where we last left of.  At the same time, so much has changed, and there are so many things that I might have done differently in hindsight.

This was the birthday that I as supposed to get a better bicycle, I’ve been clattering around on my rusty Locomotief for far too long.  But the circumstances don’t allow for the budget this April. So I linked up with an AeroPress instead.

In Europe, I make (lots of) press coffee.  The AeroPress is an individual version: insert a filter, put a scoop in the tube, add hot water, stir, press the shot, (dilute), drink.  It takes a minute and make a very good cup of coffee.

It consumes a lot of coffee when used according to the directions, so I’m varying the recipe (amount of coffee, amount of water, time to stir) and getting closer.  The quality seem better, the filter strains more out of the grounds than with a press jar.  But the one-use/one-cup makes getting a coffee into a deliberate act rather than a thoughtless pour: I’m not sure I like the distraction.

And while I’m on the subject of the kitchen…

Positive:  If you cook, you should try Saveur: I’ve been grabbing vegetable and cookie recipes out of it the past few weeks and they have really been good.

Negative: Why do people like linked oven mitts instead of separated hotpads?  I really struggle with the mitts – they are clumsy and tie my hands, where I just want to reach in and grab something.

And on immigration and expatriation, the foolishness is not limited to the UK Tier 1.  The process is similarly difficult for talented people trying to obtain US EB-1A visas.

As with the UK, only a few thousand permits are issued each year, allowing highly qualified people to immigrate without sponsorship by an employer.  So the few open slots become highly coveted and competitive: people need to extraordinarily extraordinary do people to qualify.

Why raise the bar so high for letting talent enter, holding the best applicants to only a few percent of the total inward migration?