It was snowing when we come out of the underground near the Gedenkstätte Mauer, a remnant of the Wall and the no-man’s-land that divided berlin for decades.  The wind was biting, the warmest spot was in the lee of the concrete slabs.  Everywhere, slabs, blocks, daubs of paint as slogans, protest, and decoration.

Every wall in Berlin seems to be  canvas for residents to express their feelings; every gust echoes the cold history of  the city. 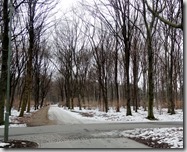 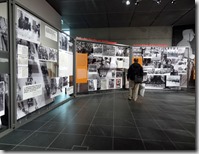 Berlin is not a happy place  I’d been reading about it’s renaissance as a center for art, media, and technology, but the reality feels abandoned and incomplete, not yet reconciled with its history or its future.  The city has a wonderful transport system, wide boulevards and a wonderful system of trains and trams.  But the monumental streets are bordered by buildings being torn down, leafless empty parks, and block high-rises devoid of windows.  Only Potsdamer Platz feels alive and electric.

I think it’s a result of the city being leveled during the War, then partitioned afterwards, first into four occupation zones, later into Ost and West.  As a result, it never had a unified urban plan, and individual projects rose among monuments, sacred jostling with commercial, hurried new construction rising on foundations of buried terrors.

My friend loves history, so we went to see the sight: the Wall, the SS Museum, Checkpoint Charlie, the Stasi compound, the Holocaust memorial.  The procession of death and suffering blends with the cold wintry weather, a tapestry of governments hurting people across a hundred years. 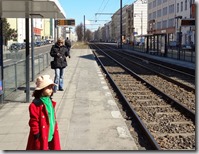 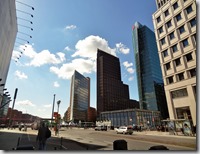 As history, it’s all interesting and informative, well preserved, labeled, acknowledged in a public penance that wavers between sincere regret and overbearing theater.   The food is good; the people are abrupt.

On the last day, the sun finally came out, and I could sense a bit of what the city might be in better seasons, better times.   But I’m in no hurry to return.